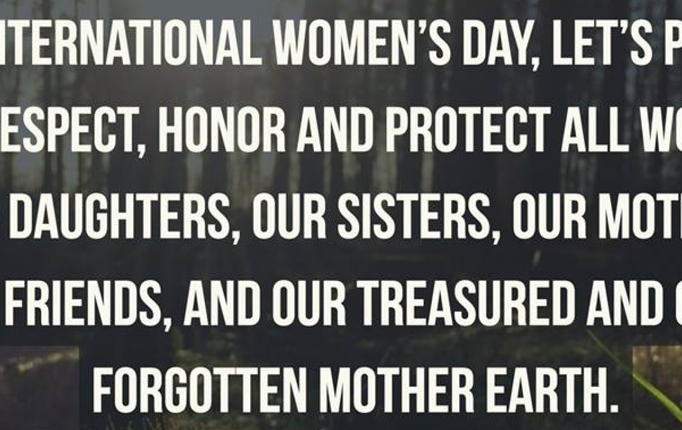 On International Women's Day, we at Voces celebrate the women who have led us in so many ways. Join us in pledging to to respect, honor and protect all women: our daughters, our sisters, our mothers, our friends, and our treasured and often forgotten Mother Earth. We are more powerful, strong, and beautiful together.

Below is a piece written by Mary Heglar and myself for Huffington Post that talks about the connection between respecting women and our planet; and how the same beliefs and behaviors that have allowed for a culture of harrassment to persist against women, undelie the mistaken belief that our planet is ours to use and abuse. #metoo #hertoo

Last year was a tough year for many of us, full of events and conversations that challenged and, hopefully, started us down a path to change. Among the ugly truths on display was the long overlooked worldwide assault on women’s rights. Even based on woefully underreported statistics, 1 in every 4 women are sexually assaulted—and 1 in 5 is raped—at some point in our lives—countless numbers are sexually harassed. There is not a single country under the sun where women live free of this threat.  Women have been historically doubted, grilled, questioned and humiliated whenever we dared to name these violations. Last year held a fresh mirror to our faces, and forced us to take meaningful action to turn this tide.

The power of the January 2017 Women’s March shook America out of its slumber and actions began to materialize. Powerful men across industry after industry were called out and toppled by the force of the #MeToo Movement. Alabama voters rejected sexual assault setting the stage for the election of the state’s first Democratic senator in more than 20 years. As survivors of sexual harassment and assault, we could not be happier about this progress and excited about what’s to come.

But the conversation is missing one powerful, phenomenal woman: Mother Earth. So much of what has led to the earth’s destruction has been driven by the same sense of entitlement, abuse of power, objectification, disrespect, and condoned exploitation that women have endured for far too long.

Driven by greed, polluting industries have exploited our planet with reckless abandon as if they were entitled and justified to carry out this destruction as business as usual. From the exploitation of native and even sacred lands (Bears Ears, Dakota Access Pipeline, Keystone Pipeline, to name a few), to the ongoing reckless extraction in the name of corporate profits, the list of offenders is long and the crimes span centuries. Drilling, mining, pillaging, raping, our misogynistic society has reduced our living, breathing Mother Earth to a faceless sea of resources ripe for the taking—robbing her of her dignity and sovereignty and harming us all.

What’s worse, our assault on Mother Earth further perpetuates second-class citizenship for women. Whether it’s water and air pollution, food insecurity, or climate change, women and girls suffer the most. Around the world, women are generally responsible for providing water, food, and care for children and elderly family members. In much of the world, women are the primary economic drivers, producing half of the food consumed and spending up to  20 hours per week collecting wood, dung or other fuels.  In the face of droughts and other disasters, women are often victimized as they search for shelter and resources. As climate change displaces people, women are more likely to fall victim to sex traffickers or to be married off prematurely.

In order to make change, we must name names. Here are a few: big oil, gas and coal companies, the Trump administration, Ryan Zinke at the Department of the Interior, Scott Pruitt at the Environmental Protection Agency.  Donald Trump’s own assault on science and facts is far too similar to the common dismissal of women who report sexual assault and harassment as neurotic liars. And who can be surprised? This is the same man who explicitly boasted about his entitlement to grab women by their pussy. Sorry, Mister President, science is real and we must believe the victims. Women’s rights are human rights. Crimes against the earth are crimes against humanity. Perpetrators must be held accountable.

As we approach the anniversary of the Women’s March, we join women everywhere in saying #MeToo. #Time’sUp. #WithHer #NoMore. Not for me, not for my sisters and not for our Mother.

ADRIANNA QUINTERO is a nationally recognized expert on sustainability, strategic power building, political engagement and diversity and inclusion. One of the leading voices in the call to diversify social movements, Adrianna created one of the first organizations dedicated to building environmental leadership among Latinos. She has made it her mission to build greater leadership and power for women, young people, and communities of color.
Adrianna has been named to the Grist 50: the innovators, organizers, and visionaries who will lead us toward a more sustainable future and was one of Huffington Post’s 10 Leaders Who Are Reshaping the Environmental Movement.

MARY ANNAISE HEGLAR is an editor and writer based in the South Bronx, but originally from Alabama and Mississippi. She has worked with various nonprofit organizations and served as associate editor at The Indypendent for six years where she often covered issues related to social and environmental justice.

Mary earned her bachelor’s degree in English with a concentration in African American and Third World Studies from Oberlin College and an editing certificate from New York University.