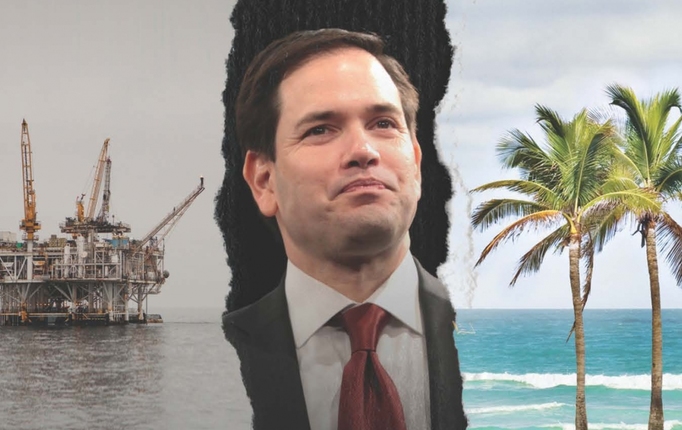 Congress is on the brink of turning Florida’s vital beaches and ocean economy into a sacrifice zone for private oil companies.  Unless Florida’s delegation and Senator Rubio, in particular, stand up against attempts to hide expanded offshore drilling in the federal budget and tax bill that is moving through the Senate and House this month.

That is why this week Voces Verdes launched an ad campaign calling on Senator Rubio to fight for Florida’s future.

The entire premise of using the budget process to expose our vibrant beaches and local communities to the hazards and harms of drilling can’t be justified any way you slice it.  Drilling won’t balance a $1.5 trillion dollar budget bill.   It won’t boost Florida’s economy.  Quite the opposite.

Oil drilling leads to oil spills that harm businesses and coastal communities, which are essential to Florida’s economic and environmental health.  For example, in 2012, the BP Deepwater Horizon disaster caused $700 million in lost recreational use and $250 million in commercial fishing losses.

As I wrote here, in Florida’s currently protected Eastern Gulf or anywhere in the region poses a direct risk to Florida’s fishing, ocean tourism, and related industries that employ over 383,300 Floridians and contribute over $18 billion to the state’s annual GDP.

More drilling will also mean more government handouts to some of the wealthiest private companies in the world, a direct hit to Florida taxpayers—adding insult to injury considering this is all supposed to be about a budget bill.

Further, all this is unfolding against the backdrop of national disasters that are already stretching federal coffers and should take priority over further padding industry profits.

Florida  and Houston  are still struggling to recover from hurricane damage, while Puerto Rico  and the US Virgin Islands face a long road towards rebuilding their lives. People in the Caribbean and Puerto Rico, still don't have basic services like clean drinking water and electricity. Leaving millions facing an uncertain future. As a mother, I cannot help but think of the parents who have to face their children this holiday season without a home, under tarps, worried if their water is safe to drink and if they’ll have enough food.

Yet, even as we face billions of dollars worth of disaster relief costs that will ultimately come out of taxpayers’ wallets, some in Congress want to burden the public with the costs and risks of offshore oil drilling.

Fortunately, there is time for Florida’s elected leaders to stop this train before it runs roughshod over Florida.

During the course of the next two weeks, the Senate will vote on which path to take:  Giving away our precious coastlines along the Atlantic and Eastern Gulf to oil companies so that they can set up their oil platforms just a few miles from our beaches—the same beaches where we play and make memories with our families. Or, cut government waste and relieve taxpayers from the burden of century-old handouts to the oil companies, while preserving Florida’s coastline.

Tell Senator Rubio, and all elected officials, to be loyal to our coasts and communities, not loyal to oil.