Voces in Action
Latina Leaders: From East LA to the White House, trying to improve the health of Latinos
View News Categories
+ 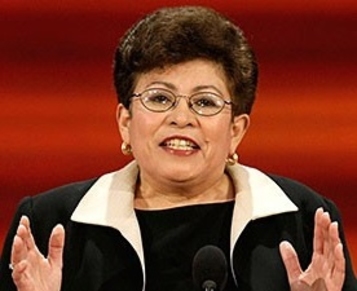 Latina Leaders: From East LA to the White House, trying to improve the health of Latinos
August 26, 2013
Health

Dr. Elena Rios is much more than a doctor of internal medicine. She says ever since she was a teenager in her hometown of East LA, she thought, “How can we help our Latino community improve?”

For the past 15 years, she been serving as the President and CEO of the National Hispanic Medical Association (NHMA), representing 45,000 Hispanic physicians in the United States, which aims at improving the health of Hispanics. She also serves as President of NHMA’s National Hispanic Health Foundation, to direct educational and research activities, while also working on the Campaign Against Obesity, the Commission to End Health Disparities, among a multitude of other causes.

“I’m just trying to understand what ways we can be of service and learn some of the policies that are at the forefront,” says Dr. Rios about the reason she gets involved with so many organizations. “You can make changes that have greater impact if you are at the top of the organization.”

Just last week, Dr. Rios was the keynote speaker at the 2013 Hispanic Healthcare Summit held in New York City —  an event for hospital managers, physicians, pharmacists, medical sales professionals, nurses and analysts to discuss how to decrease the ethnic disparities that continue to persist in health, with Hispanics still behind other ethnic groups.

“I spoke about the importance of Latinos having health care,” says Dr. Rios, mentioning that the Affordable Health Care Act can help those who don’t get insurance from their employer, and that the first open enrollment will begin on October 1. “Most of the people working in 20 to 40 years are going to be Hispanic. It’s really important that we start talking about programs so that more Latinos can go to work and not get sick…They also need to understand why they need health insurance…People need to start being more responsible and taking care of their families.”

She says everybody needs to be more responsible about healthcare. It’s a shared responsibility.

“We should think about having our children visit hospitals and having nurses and doctors go to schools, because right now there’s no connection to young kids and health care,” says Dr. Rios. “People are afraid to talk about disease — We need to change that. We need to talk about vegetables, physical activity and jobs in the healthcare industry — one of the major industries in the country — all of that is part of health care.”

Dr. Rios herself says she was first introduced to a career in medicine thanks to her mother.

“At 18, I started working in the hospital with my mother,” she says. “She was going to college to become a nurse, and I was in high school. I finished high school, and I went straight to Stanford University where I became pre-med, and I met a lot of Chicanos who were interested in health care, and I put the two together.”

Because she wanted to understand policy from the inside, she says after residency she did a government fellowship on primary care research before she got a job at the White House as advisor for regional and minority women’s health at the U.S. Department of Health.

That was nearly 20 years ago, but in her long career in Washington, she says health education has come a long way.

“The recognition of the importance of health disparities — things like poverty, crime and stress and poor nutrition, lack of fresh fruits and vegetables — people didn’t recognize that in the 1980’s,” says Dr. Rios. “In the 90’s, people started thinking about prevention. Now our food supply says lets put more preservatives and corn syrup, but I think the obesity problem was finally recognized, and the country is trying to change it.”

For example, she says school meals and after school programs now have healthier guidelines, and now there are food labels on everything.

“It hasn’t changed totally,” says Dr. Rios, but she’s also not done with her mission. “I’m very interested in finding more partners who believe in improving the health of Latinos and in continuing to build more partnerships.”

Kristina Puga is a Web Producer for NBC Latino. A graduate of Barnard College and The Columbia Graduate School of Journalism, Kristina is the product of an Ecuadorian father and a Russian mother. Raised in culturally diverse Queens, NY, she has been covering the Latino community for about a decade for publications such as the New York Daily News, AOL Latino, NYRemezcla.com, and Urban Latino.