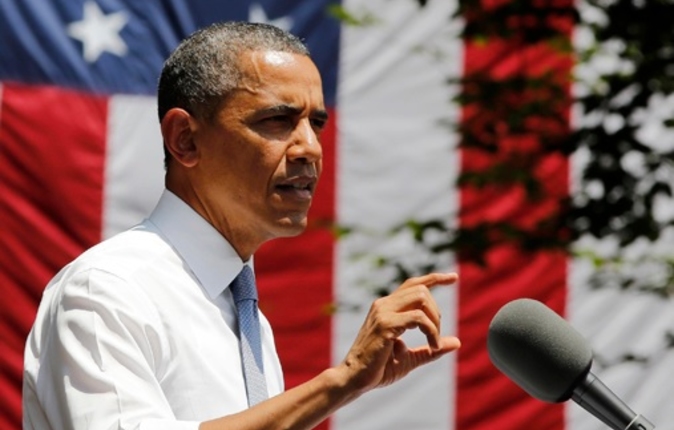 Although the emission rules are just one component of Obama’s plan, critics are looking for an early win to show they have the fortitude to fend off other sweeping actions Obama plans to take, like pollution standards for existing plants.

‘‘Our best defense is to do it right,’’ EPA Administrator Gina McCarthy said Monday. ‘‘We think that it will stand the test of time.’’

The rules would require new coal-fired power plants to install expensive technology to capture carbon dioxide. No U.S. plant has done that, largely due to the cost. Opponents say that makes the rule ripe for challenges.

A look at the options:

For Obama, the upside to using his regulatory powers is that no vote from Congress is needed. But if lawmakers don’t like a regulation, they can pass a resolution to block it. Senate Republican Leader Mitch McConnell, whose state of Kentucky is a major coal producer, says he'll do just that.

The Congressional Review Act provides for expedited Senate consideration with a simple majority vote. And the Republican-controlled House would have little difficulty passing it.

Still, it’s incredibly tough to do. Since the act was established in 1996, it’s only been used successfully once.

Even if Republicans could muscle the resolution through both chambers, it’s nearly impossible they could override Obama’s certain veto.

Lawmakers could use amendments to other bills to undercut the regulation, or try to starve the EPA of funds. But Democrats who control the Senate would work to block those moves.

The Supreme Court has already ruled the EPA has authority, under the Clean Air Act, to regulate greenhouse gases. But that doesn’t mean the EPA won’t get sued.

A large number of coal-friendly states are expected to join trade groups in suing. The American Coalition for Clean Coal Electricity, which represents the coal industry, alluded to legal action when it accused Obama of effectively banning new coal plants. ‘‘It’s almost certain the courts will have to settle this issue,’’ said ACCCE President Mike Duncan.

Still, lawsuits won’t be immediate. Opponents must wait until the EPA finalizes the rule before they can sue — a process that will take months.

If all else fails, Republicans can try to bludgeon Democrats with the issue in the 2014 elections. After all, a slew of Democrats who backed cap-and-trade emissions legislation lost their seats in 2010, helping Republicans seize the House.

If Republicans strengthened their House majority and reclaimed the Senate, they'd be better positioned to obstruct Obama on this and other elements of his climate plan.

Many of the most competitive Senate races —like West Virginia, Kentucky and Louisiana — are in key energy-producing states where the issue could resonate deeply.

Not all Democrats support Obama’s plan, and the fact that lawmakers didn’t have to vote on the regulation may help. But National Republican Congressional Committee spokeswoman Andrea Bozek said it’s up to Democrats to distance themselves from their president.

‘‘It’s their responsibility to explain it,’’ Bozek said. ‘‘That D next to their name allows us to highlight their support for Obama’s policies that are hurting jobs in their district.’’