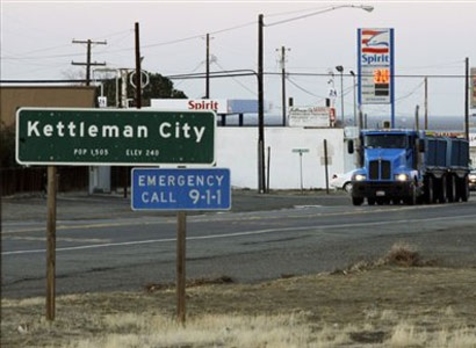 Time Running Out For Latino Community Standing Up Against Waste Facility
October 11, 2013
Clean Air
Clean Energy
Climate Change
Environment
Green Jobs
Health
The town of Kettleman City, Calif., site of a toxic waste landfill, is plagued with infant mortality and birth defects. Update: According to The Center for Race Poverty and the Environment, the Department of Toxic Substance Control is extending comment period regarding proposed expansion of the Kettleman City Waste Facility until Oct. 25. The petition will remain open until that time.

A low-income community that came out fighting against a local toxic landfill isn’t giving up, producing a short documentary and launching a nationwide campaign to draw attention to what they claim is an operation that is causing illness and death.

“What we want to accomplish with this piece is expose the issue and get the Department of Toxic Substances Control to stop the expansion of Waste Management’s facility in Kettleman City, California,” Cuentame producer Luis Moreno told Mint Press News.

The Latino community of Kettleman City, Calif. is home to the largest toxic waste facility west of the Mississippi River — and residents there are calling for an investigation into whether this is to blame for the unusually high rates of birth defects that have harmed and killed their children.

In just over a year, five children were born with a cleft palate, three of whom have died. The city’s population is just 1,439.

“In such a small town, it seems to me that the number of illnesses is extremely high,” Maria Saucedo, a Kettleman City resident who has lost one child to a mysterious illness, said in a short film produced by Cuentame, an immigrant rights organization.

The owner of the facility is Waste Management, a company whose presence stretches across the United States. In 2012, Waste Management indicated its yearly revenue was $13.6 billion.

Throughout the last four years, the company has had 72 hazardous material spills at the Kettleman facility that went unreported — the company was fined $300,000 for failing to report the incidents. As the only waste facility in the state that accepts PCBs, a banned carcinogen, the cause for concern among area residents is real.

A sign located on the outside of the Kettleman City waste facility reads, “WARNING: This facility contains chemicals known to the State of California to cause cancer or birth defects or other reproductive harm,” according to video captured by an immigrant rights advocacy organization.

Residents are outraged over the seemingly small fine with seemingly large consequences — and now, in the face of that frustration, Waste Management is looking to increase its capacity for solid waste in that very same neighborhood.

The company is hoping to expand its current Waste Management facility, with a new plant proposed to border the existing plant. The permit for expansion would lead to an additional 5 million cubic yards — an increase of 50 percent.

According to a post on the Waste Management Kettleman Facility website, the operation is one of the most regulated facilities in the state.

“Strict federal, state and local regulations include comprehensive air-quality protection and groundwater programs at the site, as well as daily, weekly, quarterly and annual inspections and regular reports to elected officials and regulatory authorities,” it states, adding that “four different local, state and federal entities have studied” the facility, “and all concluded that it does not impact local residents.”

For area residents already coping with high leukemia rates and death rates among their own children, that’s not acceptable.

Residents in Kettleman City are rallying together with environmental and health advocates throughout the nation, calling on anyone and everything to support them in their efforts to stop the expansion.

The My Cuentame organization has launched a petition, directed at the Department of Toxic Substances Control, calling on it to turn down the proposed expansion.

The deadline for the decision is today. As of Thursday, the petition had compiled nearly 3,000 signatures.

Saucedo is a field worker and resident of Kettleman City, Calif. Her daughter died at 10 years of age, due to a blood infection — or so she believes.

The saga for Saucedo began in 2007, when she became pregnant with her second child. When her child had progressed to five months, she was informed that doctors could not locate the baby’s heart. She had a C-section, and gave birth to what was proclaimed a dead child, yet the baby was resuscitated and survived — but doctors didn’t give her baby girl long to live.

“The doctor told me the baby was going to die,” Saucedo said in a recent short film, produced and published by My Cuentame. “She may live a day, a week, a month … [the doctor] didn’t know.”

In addition to a near-death, her daughter was born with deformities. Before she made it to even 11 months, her daughter had died from a blood infection, the cause of which is not known.

“Sadly, I have never received an explanation as to why she died, or why she was born that way,” she said.

Saucedo had another daughter after her loss. While seemingly healthy, her daughter, Xitlali suffers from asthma, another common occurrence among the young of Kettleman City.

Ingrid Brostrom is an attorney with the Center on Race, Poverty and the Environment. Working with those in Kettleman City, she’s seen the high rates of leukemia, asthma and infant mortality — and she points her finger at a possible link to the waste facility.

In November, a 2-year-old died of leukemia, marking yet another tragedy in the community.

For residents struggling with a mysterious and agonizing trend of early childhood mortality, the question they consistently ask is: “Why us?”

The most recent proposal to expand the facility in Kettleman City would only add to the problem, creating a space that could hold an additional 30 years of toxic waste — the very waste admitted to cause birth defects.

“The reason they’re trying to expand it is because they’ve run out of room to bury toxic waste,” Alatorre said.

And, according to Brostrom, a regulatory agency that has been siding with the very companies responsible for pollution violations. The Department of Toxic Substances Control has repeatedly sided with the industry, giving Brostrom and area residents little hope in their fight to stand up to a national corporation.

“They have indicated that they plan to approve the project,” Brostrom said. “Most recently, Chem Waste has hired its own public relations, set them up with a house in the town of Kettleman City and he is trying to convince the residents that Chem Waste is beneficial to the town.”

But area residents, who are aware that their small community is plagued by a high rate of illnesses, aren’t buying it, pointing to the building next door with the sign that states it houses chemical material that causes birth defects and cancer.