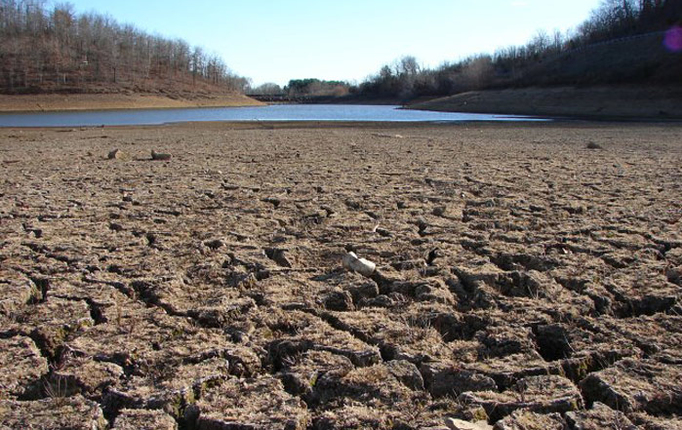 Thirsty California may get a smidgen of rain this coming week, but it is not likely to change what, so far, has been the driest calendar year in recorded history.

No rain at all fell in San Francisco in October and only 3.95 inches has fallen since Jan. 1, the smallest amount of precipitation to date since record keeping began 164 years ago, according to the National Weather Service.

Things can still change, but the storm predicted to roll in Monday and Tuesday has already petered out, according to forecasters, who are expecting only sprinkles, if that.

"It's absolutely dry," said Bob Benjamin, a National Weather Service forecaster. "We just went through October where there was no measurable precipitation in downtown San Francisco. That's only happened seven times since records started."

The previous record dry year was in 1976, when 5.57 inches of rain fell in San Francisco over the 311 days between Jan. 1 and Nov. 7. Meteorologists use San Francisco as a benchmark because it has the longest consecutive rainfall record in the state, going back to 1849-50.

"It's going to be reflective of what we would expect throughout the Bay Area," Benjamin said. "It's probably safe to assume that the other areas are close to the lowest if they aren't at the lowest."

The tinder-dry table was set over the first five months of the year, when the bulk of the rain normally falls. Only 3.32 inches of rain fell in the city between January and May - a record set for the lowest amount of rainfall for that stretch of time. There has been very little precipitation since then, but that is to be expected since the summer months are always dry, said Jan Null, a meteorologist for Golden Gate Weather Services and an adjunct professor of meteorology at San Francisco State University.

"We've never had any year dryer through October," said Null, adding that there is no reason to get panicky with two months left in the year. Making predictions based on rainfall through October is, he said, "like giving the final score of the Giants game after eight innings."

Looking up at the perpetually blaring sun is nevertheless giving water managers reason to be downcast. The state's reservoirs are all well below their normal carrying capacity, according to Arthur Hinojosa, the chief of hydrology and flood operations for the California Department of Water Resources.

"Generally speaking, it has been dry across the state, and it has been remarkably dry where the population centers are and where the bulk of the water storage is," Hinojosa said. "Most operators plan on multiyear dry years, but nobody plans on as dry as we've seen."

The dry weather is also extending the fire season. The California Department of Forestry and Fire Protection has responded to 6,439 fires this year, almost 2,000 more fires than during an average year, said Battalion Chief Julie Hutchinson. That doesn't include fires on federal land like the Rim Fire, which burned 400 square miles in and around the Stanislaus National Forest and Yosemite National Park.

"We've seen about a 39 percent increase in activity compared to an average year," Hutchinson said. "There have been more fires and more frequent fires, which is due to the lack of rainfall and the dryness. We also saw a significant number of fires statewide in higher elevation timber stands, which you normally don't see. That's because of the lack of snowfall."

'We're not done yet'

Hutchinson said the department anticipated the problem and put most of its resources into the initial attack. As a result, only 139,128 acres have burned compared with 279,592 acres in an average year to date.

"We're not done yet," she said. "There are still areas of the state that are very dry, so we're really not going to be able to take a deep breath until we have a significant amount of moisture."