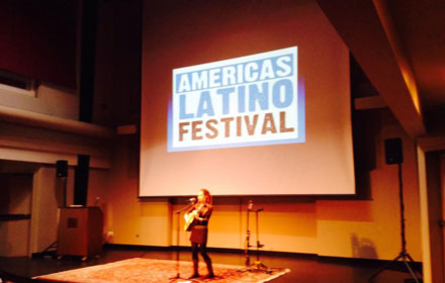 "Conservation movements are very white, and it’s time to make them more brown,” says Irene Vilar, the founder and director of the Americas Latino Festival, a three-day event happening in Boulder, Denver and Longmont Saturday, Nov. 16, through Monday, Nov. 18.

“We’ve been going around the state saying, ‘Listen in six years, more than 50 percent of high school students in Colorado will be Hispanic,’” Vilar says. “And yet, where are we at, in terms of people’s perceptions of how brown or white this region is? And that applies to the whole country.”

Still, environmental movements, for whatever reasons, tend to ignore Latinos, Vilar says. When people think green, the next color they might think is white.

It’s for this reason Vilar created the Americas Latino Festival. The festival aims to bring the top Latino environmental leaders, as well as artists, writers, musicians and filmmakers, under one tent to promote Latinos as leaders in the environmental movement.

“When you take conservation movements and green campaigns, manufactured by companies, they really aren’t targeting Hispanic communities because of a couple of myths,” Vilar explains. “We have a huge middle class, and we’re moving upwardly very fast. But the stereotype of us as consumers is really based on that of the underserved community. But that segment suffers the same as white blue-collared [population], which is poverty. When you’re poor in this country, you really can’t make healthy choices.”

The festival takes a multi-faceted approach. Speakers will give talks throughout the weekend at the Boulder Public Library, people like Pulitzer-winning novelist Junot Diaz (see story), author Laura Esquivel, journalists Sonia Nazario and Ray Suarez, and many more. On Nov. 16-17, many of the same speakers and a few others will give lectures at the McNichols Civic Center Building in Denver. A film festival, featuring 17 films, will happen throughout the festival at the library, McNichols, and various locations on the University of Colorado Boulder campus. Art exhibits will pop up at the Boulder Public Library, the Boulder Museum of Contemporary Art, the University of Colorado Museum of Natural History, Denver International Airport and more. Some of the venues will also host music events. A Family Day, on Sunday, Nov. 17, will offer workshops, concerts and art exhibits for all ages.

Adrianna Quintero, a senior attorney at the Natural Resources Defense Council, says that environmental movements need to realize they have a large amount of untapped allies in the Latino community.

“What we don’t often realize, and this is why the festival is so important, is just how interested and committed the Latino community is on environmental issues, whether you’re talking about climate change, clean air, or conservation issues,” says Quintero, who’s speaking at the Boulder Public Library on Saturday, Nov. 16, at 12 p.m., with the Sierra Club’s Javier Sierra and National Center for Atmospheric Research scientist Paty Romero-Lankao. “It’s just an issue that for most Latinos is very close to their heart, even though we don’t traditionally think of Latinos as environmentalists, they really are.”

Ray Suarez was a correspondent on PBS NewsHour for 14 years before recently accepting a job as host of Inside Story on Al Jazeera America. His recent book, Latino Americans: The 500-Year Legacy That Shaped a Nation,explored the role Latinos have taken in shaping the history of the United States. He says for many Latinos, environmental issues strike close to heart.

“You have to keep in mind the entire environmental degradation that is abstract to most is real to Latinos,” Suarez says. “They tend to live in the real estate that abuts factories, solid waste transportation. … The idea that environmental degradation has a real human cost is not something they read about in the newspaper. It’s something they live.”

Of course, the point of the festival is to raise awareness of environmental issues as a nonpartisan, non-racial issue.

“In this environmental platform, ironically, we can all come together,” Vilar says. “It’s not divisive. It’s an inclusive platform. Our children all drink the same water and breathe the same air.”

Comedian and Hollywood writer Rick Najera, who will be speaking at the festival about his memoir Almost White: Forced Confessions of a Latino in Hollywood, agrees.

“You don’t have to be Latino to enjoy this festival. Most of the time, Latinos, we’re not this apartheid group that is in this little corner by ourselves. We’re going to be the solution makers,” Najera says. “The environment shouldn’t be a white liberal thing. It really should not be at all.

Quintero’s research with the NRDC and other organizations show widespread support for pro-environmental policies among Latinos, and she says the environmental movement would benefit from reaching out to Latinos.

“I think what we find is that a lot of folks in the Latino community, climate change has not become a political issue,” she says. “It’s a human issue that needs to be dealt with regardless of who’s in power.”

Nazario won a Pulitzer for an article she wrote that she eventually turned into Enrique’s Journey, the tale of a Honduran boy migrating to the United States. She has written op-eds and given talks about immigration, and she says an increasing number of the people who seek to enter the United States from Latin America do so because of environmental issues. She says that rising ocean levels and natural disasters are driving a new wave of migration around the world.

“About 3 percent of people in the world have migrated, about 214 million people, and increasingly that’s being driven by rising waters,” Nazario says. “When I was in Tegucigalpa [Honduras], you could see whole sections of mountainsides that had been sheared off where people had lived, where the shacks had tumbled down because of this huge hurricane. As we’re seeing more of this unpredictable weather activity, we’re seeing more people escaping regions where that’s a factor.”

Vilar hopes the festival will help to dispel negative stereotypes about Latinos. When people think Latino, the political issues that come to mind are ones like immigration and affirmative action, she says. She hopes the festival will shine a light on the growing Latino population and serve as a wakeup call to the environmental movement that it has allies among Latino Americans.

“[The festival] positions Latinos in a place of hosting a high-end thoughtful summit of thought, and validates them in that role,” she says. “It’s time to position Latinos in a more high-end, thoughtful place.”