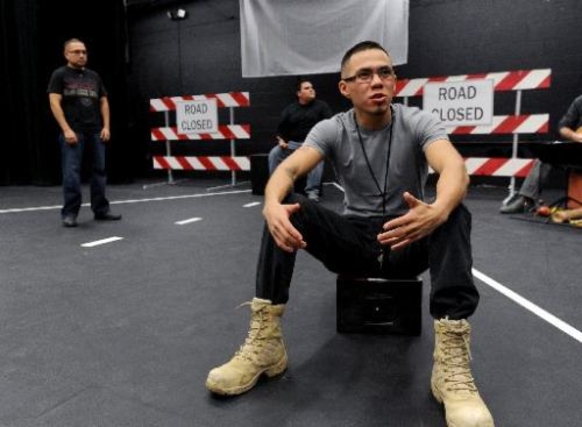 Think of the idealized image of the conservationist, the John Muir type exploring mountaintops in remote expanses of nature. American environmentalism was fertilized by the myth of the lone adventurer. But the roots of the modern movement stretch in many directions, and the purpose of the inaugural Americas Latino Festival is to follow those paths.

The festival, presented by the nonprofit Americas for Conservation and the Arts, is scheduled to take place Saturday through Monday in various locations in Boulder and Denver.

In conjunction with the festival, a performance of the immigration-themed "Do You Know Who I Am?" is scheduled for 7 p.m. Saturday at the Longmont Performing Arts Center. Performance artist Guillermo Gomez-Pena will introduce the show.

The production is written and directed by Kirsten Wilson of Motus Theater and sponsored by the Colorado Immigrant Rights Coalition, Longmont Youth for Equality and Immigrant Legal Center of Boulder County. Organizer Irene Vilar wants the Americas Latino Festival to unite diverse communities around the goal of environmental awareness and a sustainable future. She added that Latinos often are not credited with environmental concerns, but that's a misperception. Many Latino communities are naturally conservationist, and Latinos are a growing segment of America, she said.

"The conservationist movement is very white, and the country is very brown," Vilar said. The festival "is about inclusion."

The Americas Latino Festival will kick off at 10:45 a.m. Saturday at the Boulder Public Library and at 12:30 p.m. Saturday at the McNichols Civic Center Building in Denver. It includes three days of performances, films and keynote speakers. One of the speakers is Junot Diaz, author of "This is How You Lose Her," who is scheduled to appear at events in Boulder and Denver on Saturday and Sunday.

Another speaker is Adrianna Quintero, senior attorney with the Natural Resources Defense Council.

Quintero said in an interview this week that polls support the notion that Latinos are strongly conservationist. A recent survey by Latino Decisions and Voces Verdes, for example, found that 86 percent of Latinos believe the president should use his power to limit climate change-causing pollution. A Latino Decisions poll released in 2012 found that "Latino voters in Colorado care deeply about protecting water (and) air from potential oil shale development."

Latinos might sometimes use national parks for recreation as opposed to soul-searching hikes, but that doesn't mean they value preservation less than anyone else, Quintero said.

Latinos often come from countries with strong agricultural traditions and are acutely aware of the adverse effects of poor environmental stewardship.

"There is a cultural significance of conservation to Latinos," Quintero said. "There's a big concern of the impacts to these Latin American countries."

Plus, she said, "they still very much believe in protecting their future generations."

One of the highlights of the festival will be Family Day on Sunday at the University of Colorado Museum of Natural History in Boulder. Three artists plan to participate in the event.

The film "Hecho en Mexico" is scheduled to screen at 6:30 p.m. Sunday at the Boulder Public Library, and it includes a talk-back session with filmmaker Duncan Bridgeman. Bridgeman is a native of England working in North America who made a film about Mexico -- this is the kind of bridge-building Vilar is seeking.

"I'm really attracted by that," Vilar said. "When we find that middle ground of mutual respect."

She expects the festival to be an annual event. "I think we have a great product," she said.

"I think this could become a signature event for Boulder."