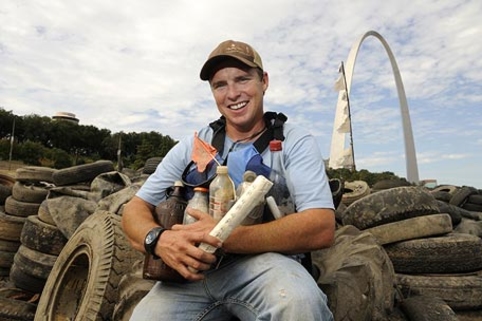 Chad Pregracke of Illinois was one of ten recipients of the 2013 CNN Hero of the Year awards for his dedication in cleaning up the Mississippi River and other waterways across the United States.

What started as an initiative he began by himself, Pregracke has grown this project by creating the nonprofit, Living Lands & Waters, where he has been able to organize community cleanups and attract about 70,000 volunteers to collect more than 7 million pounds of debris.

"We often times think these crises and these problems are far away and are somebody else's problems. Here's a guy who saw a problem right here and is addressing it. And we all need to do that," said Father Bud Grant of St. Ambrose University.

“If I had one thing to say, it wouldn't even be about rivers necessarily. It would be about finding [a] cause that's dear to you and taking action,” said Pregracke. “Change is slow, like a barge or train, [but] once it builds momentum, it's hard to stop.”