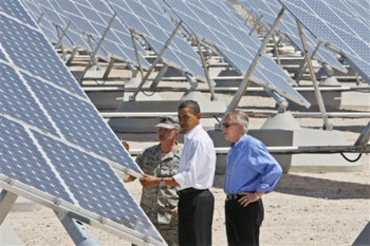 WASHINGTON (AP) — President Barack Obama is ordering the federal government to nearly triple to 20 percent its use of renewable sources for electricity by 2020.

Obama is to announce the plan Thursday as part of his wide-ranging, second-term drive to combat climate change and prepare for its effects. A plan announced in June would put first-time limits on carbon pollution from new and existing power plants, boost renewable energy production on federal lands and prepare communities to deal with higher temperatures.

The Associated Press obtained an advance copy of the executive order on renewable energy, which applies to all federal agencies, civilian and military.

Matthew Daly is an Energy and Environment Correspondent for the Associated Press.

This article originally appeared in the Associated Press.