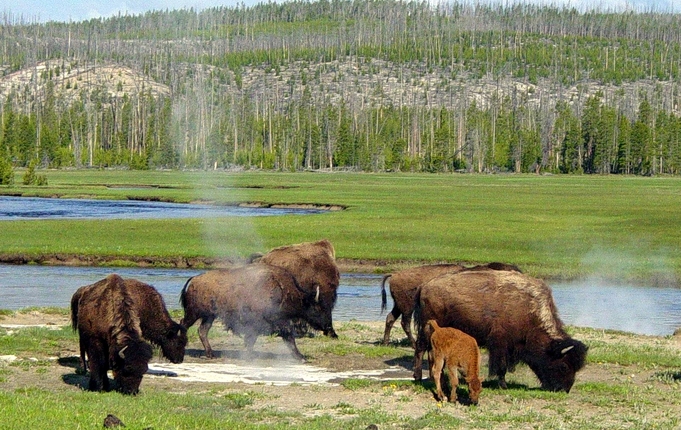 New Report On Yellowstone Finds Park Has A Fever And The Only Prescription Is Less Carbon Pollution
December 13, 2013
Clean Air
Climate Change
Environment

Yellowstone National Park was not only the U.S.’s first national park, it was the world’s first national park — inspiring countries to set aside public land, for the public, around the globe. Yellowstone has seen many changes over its nearly 150 years as a park, from the extirpation of wolves in the mid 1990′s and their later successful reintroduction, to the epic fire season of 1988, which left more than one-third of the massive park blackened and scorched.

But not until recently has Yellowstone had to contend with the variety and severity of the ecological impacts that come with a changing climate. Park managers, charged with minimizing human interference in this haven of the American West as it was, now have a much bigger task on their hands than preventing littering and making sure campfires are out. An entire global system is out of balance.

The report finds that precipitation has been declining, while temperatures have been on the rise throughout much of the Greater Yellowstone Area. The data show that Yellowstone is still gripped in a long-term drought. Total annual precipitation at Mammoth Hot Springs has been below average since 1976. The 5-year running average of annual peak snowpack at the Northeast entrance has declined 22 percent since 1975 — from 14.5 inches to 11.3 inches. The length of the snow season has declined as well. In 1980, peak snowpack lasted for 208 days, now it only stays around for 185 days.

The drought conditions in the park are hitting amphibians especially hard. One-quarter of the park’s wetland sites didn't have enough surface water in 2012 for breeding amphibians.

The annual average temperature is more than 3 degrees higher than it was between 1971 and 2000, mainly due to rising low temperatures. At the Northeast park entrance, the average minimum daily temperature has increased by 4.6 degrees since 1989.

Warmer weather and prolonged drought are also expected to lead to more wildfire-charred park acres in the future. At present, only “unnatural fires” i.e. those started by careless campers, are put out.

In 2011, the first comprehensive evaluation of how climate change will affect the greater Yellowstone ecosystem was published by the Rocky Mountain Climate Organization, and the Greater Yellowstone Coalition. That report cited vanishing glacial ice and fewer migratory elk as meadow grasses withered in the heat and drought, as some of the most noticeable impacts of climate change already being felt in the park. Warmer temperatures, which have allowed infestations of tree-killing beetles previously held at bay by cold nights, were also highlighted as a major consequence of a warming world. Whitebark pine, a crucial late-season food source for grizzly bears, has been especially hard-hit by the infestation.

Tourism in Yellowstone National Park brings in over $700 annually to local economies. Over 3.4 million visitors made the trip in 2012.

Joanna M. Foster is a Reporter for Climate Progress. She holds an M.A. in Science, Health and Environmental Reporting from New York University and a B.A. in Ecology and Evolutionary Biology from Princeton. Before joining the team at Climate Progress, she wrote for the Green Blog at the New York Times. Her writing has also appeared in OnEarth Magazine, Grist, Mother Jones and at the American Museum of Natural History.