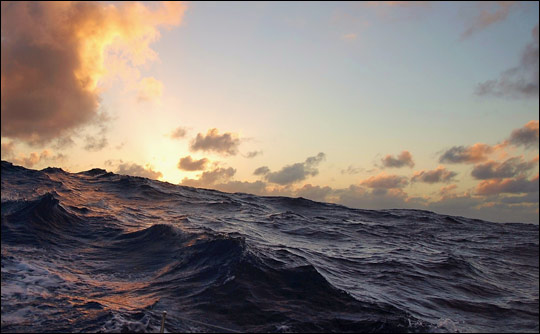 Oceans cover about 70 percent of the Earth’s surface, and act as an important carbon sink. However, each part of the ocean works in different ways to take up carbon from the atmosphere and store it. Two new studies shed light on the nuances how these processes work in the Arctic Ocean and coastal zones.

The findings about the Arctic Ocean were published recently in the journal Global Biogeochemical Cycles. Stephanie Dutkiewicz, a research scientist at the Massachusetts Institute for Technology, worked with colleagues to figure out how decreasing sea ice in the summer is affecting the carbon cycle in that ocean basin from 1997-2006.

That period is in the middle a timeframe when the Arctic has been warming twice as fast as the rest of the globe, leading to major losses in sea ice, which hit a record low in 2012. Over that time, the Arctic Ocean has become a greater repository for carbon.

That’s because more open water provides more suitable habitat for phytoplankton, or algae, to grow and suck carbon dioxide out of the air. As days get shorter, the algae dies and sinks, sequestering the carbon at the bottom of the ocean.

With summer loss of sea ice and warming in the Arctic projected to continue, phytoplankton blooms are likely to be a more common occurance across the region. However, the warming trend encouraging algae growth could also have negative consequences on another ocean mechanism that removes carbon from the atmosphere.

Sunlight not only increases plant life but it also warms the surface waters of the Arctic. Dutkiewicz’s findings show that warming could eventually reduce the Arctic Ocean’s ability to absorb carbon dioxide because cold water dissolves it better than warm water.

Of course water is warming in a relative sense in the Arctic. Sea surface temperatures in the region have risen since 1965 but are still near freezing for most of the region during the summer. However, if the trend continues it could still reduce the region’s ability to take up carbon. Dutkiewicz also said the study’s findings have applications beyond the Arctic’s borders.

"The processes we’re looking at are happening everywhere,” Dutkiewicz said. “We need to be studying it (in the Arctic) and understanding the changes. That will help us understand what will happen in 20 or 50 years in other parts of other oceans.”

The other study, a review published in Nature, found that coastal oceans are also helping store carbon. Coastals oceans account for only 7 percent of the overall area of oceans, but the new study finds they play an outsize role when it comes to carbon storage.

Coastal zones weren’t always carbon sinks. Prior to the Industrial Revolution, oceans acted as net emitters of carbon. However, in the ensuing 50-100 years, a shift occurred and these areas now take up more carbon than they emit.

“Traditionally, most thinking has been that there’s a shift in biological production in recent decades, that the ocean has become more productive,” said Wei-Jun Cai, an oceanographer at the University of Delaware and author of the report. The reason, he said, is because increased runoff from agriculture finds it way down rivers and into the coastal zone, which in turn increases plant life.

That relationship doesn’t exist in coastal areas, though. Cai recalled a trip to measure carbon dioxide in the water off the Georgia coast in 2005.

“It was very similar to what someone else measured in 1995,” he said about his measurements. “I was shocked as there was very little increase. The reason is the water doesn’t stay there for a long enough time so it doesn’t really accumulate the anthropogenic signal.”

Instead, water in coastal zones is constantly on the move thanks to the conveyor belt of ocean currents. Those currents eventually dive to the depth of the ocean, and could be storing the carbon down there according to Cai’s theory.

Both studies point to the need for better monitoring in both those regions. They offer tantalizing results that suggest revisiting our understanding of the globe’s carbon budget, but more data is needed to reinforce their results.

That data would not only inform a better understanding of the planet’s carbon budget, but also paint a clearer picture of how regions that have great economic and environmental importance are changing.

Brian Kahn is a Web Editor at Climate Central. He previously worked at the International Research Institute for Climate and Society and partnered with climate.gov to produce multimedia stories, manage social media campaigns and develop version 2.0 of climate.gov. His writing has also appeared in the Wall Street Journal, Grist, the Daily Kos, Justmeans and the Yale Forum on Climate Change in the Media.