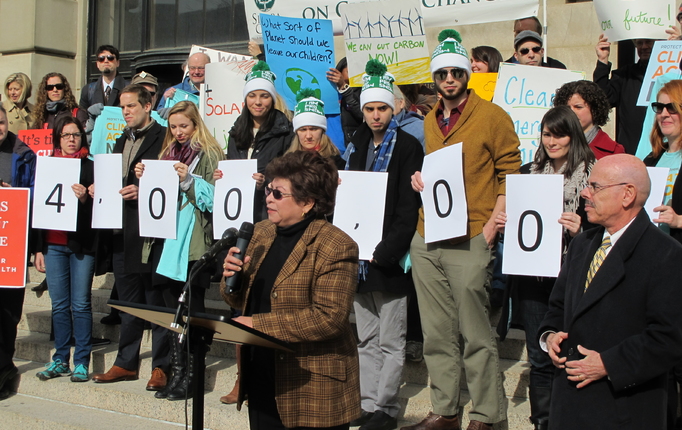 The EPA is holding a daylong hearing in Washington to take public comments on its proposed standard to limit carbon pollution from power plants that are built in the future.

The new source standard is part of a national climate strategy President Obama announced last summer. Next, the EPA is scheduled to propose by June cutting carbon pollution from the nation’s roughly 600 existing power plants. Power plants are responsible for 40 percent of the nation’s carbon footprint and are a driving force behind climate change.

In his statement, here, Fernando Cazares, NRDC/Voces Verdes fellow, highlights the results from a new national poll showing overwhelming support among Latinos in the United States for the EPA taking action against climate change.

“Nationally, nine in 10 Latinos want the government to take action against the dangers of global warming and climate change,” Cazares says. “Of those, 68 percent of Republican Latinos say that it is important—including 46 percent of Republicans who say it’s very or extremely important—for our government to tackle global warming and climate change.  We trust our state and federal government agencies to exercise their authority and duty to protect us from the effects of pollution from fossil fuels and the climate change that it drives, on our health and the resources that our country’s future generations need to achieve their dreams.”

Dr. Elena Rios, President and CEO of the National Hispanic Medical Association and Board member of Voces Verdes spoke during the press conference.

"I am here today because we at NHMA recognize that climate change is a public health issue and one that we must address now," Dr. Rios says.  "Our members and I took an oath to use our medical training to protect the health of all of our patients.  We know that climate change is real. Extreme weather has wreaked havoc on our country with every freak storm, every drought, every heat wave, and wildfire impacting communities around the country and children, the elderly and low-income people bear the brunt of the cost of warmer weather, greater heat stress, respiratory illnesses, and the lack of resources to mitigate the impacts of floods and drought.  That is why I stand here to say that as a doctor, I support the EPA adopting a strong rule to limit carbon from new power plants. Our country and our planet need this rule."

Mr. Edwin Luevanos, CEO of Citizen-Energy and part of the national coalition of Voces Verdes leaders for the environment is expected to speak during the hearing.

"As a father of a 5 year old girl, I couldn’t ask for a more rewarding job," says Edwin Luevanos, Founder and CEO of Citizen Energy. "I am proud to be part of the solution to build a more sustainable future for her and the next generation. Citizen Energy has helped building owners improve building efficiency and cut their carbon footprint by at least 30%. We’ve made the business case and persuaded them to invest in clean energy technologies. My business partners and I are committed to drive these results even further, and have begun to look at the business opportunities provided by distributed solar development. As you may know, solar has the highest potential than any other renewable, capable of reducing carbon emissions in the U.S. by up to 25% by 2030. Ee are looking to accelerate this by building community solar facilities and providing solar access to ‘unserved’ communities like renters, who can’t install solar panels at their leased homes. We are doing our part, and I applaud the work of the EPA and president Obama to do their part, and finally limit carbon pollution from power plants, which until now are free to spill uncontrolled amounts of carbon dioxide into the air we breathe. These regulations couldn’t come any sooner! The science is settled; we know that human activity, specifically our burning of fossil fuels to generate energy, is a main driver of climate change.  We are counting on the EPA to establish clear and strong standards for carbon emissions from new power plants now and move firmly to do the same for existing plants. Our economy and future generations are counting on you to act."