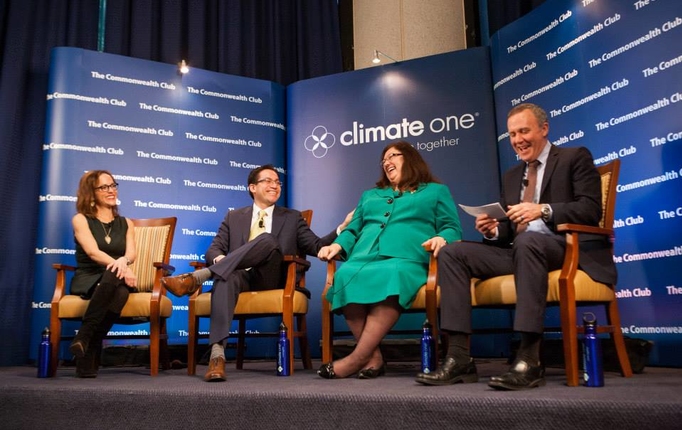 On February 7th, Voces Verdes Founder and NRDC Senior Attorney Adrianna Quintero joined a panel of speakers for a conversation on how carbon pollution affected Latinos and how they are engaging around it in an election year.

In a collaboration between Climate One and The Commonwealth Club, “Green Latinos” opened a discussion in front of a live audience between Quintero, Greg Dalton, Founder of Climate One, Orson Aguilar, Executive Director of the Greenlining Institute, and Catherine Sandoval, Commissioner of the California Public Utilities Commission on the environmental impacts of Latino communities and how Hispanic voices impacts energy politics in the 2014 elections and beyond.

When it comes to the environment: “We care about it because we suffer from it, but we also want to see solutions that make us healthier but also make our economies healthier,” said Aguilar.

On who shows up most to a call to action: “Latinas consistently are the ones showing up who are conserving energy and who are conserving water in bigger numbers,” said Sandoval. “It’s a question not only about saving money in my household bill, but the consciousness of the impact, not just on the familia but on the community, and doing it for the sake of the community.”

Do Latinos believe the government can implement measures to combat climate change? “We need more people to believe that we can get it done if we’re ever going to see any kind of success,” said Quintero. “There are not going to be easy lifts, but it is doable and this is still the greatest country in the world.”

To hear more, the audio podcast is available for download on iTunes.