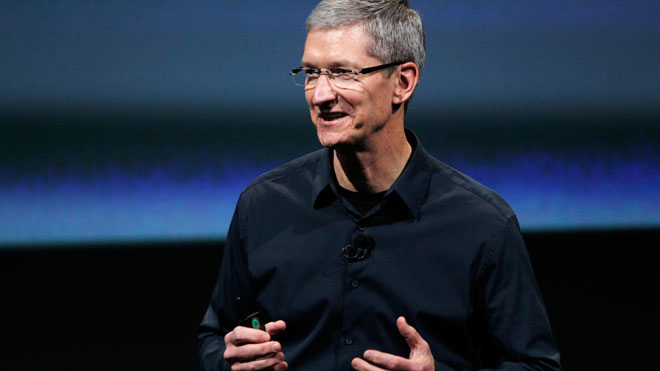 Apple CEO Tim Cook has not been known for taking a strong stand on, well, just about anything. Caution has been the watchword of Cook's three-year tenure at the top of the world's wealthiest technology company. So far his legacy is largely comprised of incremental improvements in established products, tweaks to the supply chain, and more corporate transparency.

But Cook does care about the environment — and that became very clear on Friday, when the CEO had a terse exchange with an anti-environmental lobbying group.

Apple has made vast improvements in its use of renewable energy since Cook took over from Steve Jobs. More than three-quarters of the company's facilities worldwide, including all of its data centers and its Cupertino HQ, now run on solar, wind, geothermal or hydro power, up from about a quarter under Jobs. Last year, Cook hired Lisa Jackson, former head of the EPA, to lead the company's sustainability efforts.

None of that sits well with folks who don't think climate change is a big deal — such as the National Center for Public Policy Research, a conservative think tank based in Washington, D.C. and an Apple shareholder. At the company's annual shareholder meeting, the NCPPR urged Cook and the board to pledge that Apple wouldn't pursue any more environmental initiatives that didn't improve its bottom line.

"We object to increased government control over company products and operations, and likewise mandatory environmental standards," wrote NCPPR general counsel Justin Danhof in a statement before the meeting. "This is something [Apple] should be actively fighting, not preparing surrender."

Cook's response was blistering. First of all, he insisted, environmental efforts also make economic sense. Even so, "we do a lot of things for reasons besides profit motive," the CEO said. "We want to leave the world better than we found it."

Anyone who had a problem with that? They should sell their Apple shares. "Get out of the stock," Cook suggested. Danhof's proposal was voted down by shareholders.

It's a measure of the strength of Apple's position that Cook can afford to irritate such a large and powerful shareholder on a matter of principle. But it also offers hope for environmentalists frustrated by the lack of progress on climate change that — in Apple's drought-ridden home state, at least — now seems all too real. Greenpeace recently applauded Cook for working to reduce the number of "conflict minerals" in Apple products. Now it has one more reason to cheer.

Chris Taylor, a veteran journalist with more than 15 years of experience, heads up Mashable’s editorial team. He oversees the development of reporters, while working closely with Mashable’s editor-in-chief to select, develop and coordinate news coverage across the site.

This article originally appeared in Mashable.