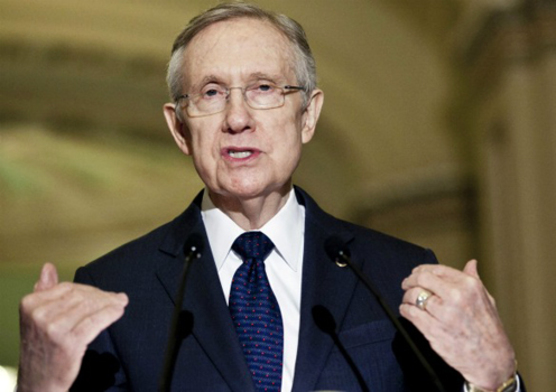 "Climate change is the worst problem facing the world today," said the Nevada Democrat at a roundtable with reporters.

Reid has been growing ever more assertive on climate change. Last June, he said in a speech on the Senate floor that "we have no more important issue in the world than this issue, period."

Four years ago, it was the Democrat-led Senate that effectively killed off major climate legislation. And it was Reid who delivered the bill's eulogy, remarking that he knew he just didn't have the votes to pass it.

Senators who have long advocated for more action on climate change have taken Reid's recent rhetoric as a positive sign. Rhode Island Democrat Sheldon Whitehouse has said Reid's climate remarks are evidence that the profile of the issue has "climbed considerably." Next Monday, a group of senators is planning to take over the Senate floor for a whole night to discuss the importance of addressing climate change.

Reid also bashed the proposed Keystone XL pipeline, the approval of which is pending before President Barack Obama and Secretary of State John Kerry. The pipeline would carry oil from the tar sands of Alberta, Canada, to refineries in Texas. "To think that that pipeline would be built ... That just doesn't sound like a very good idea to me," said Reid, who has previously said he opposes the pipeline.

Reid also insinuated that Charles and David Koch, the prominent conservative funders who have made much of their money off oil, gas and chemicals, are behind the push to approve Keystone XL. While reports have argued that Koch Industries and its subsidiaries stand to benefit from the pipeline's construction, the company has said that it has "no financial stake" in the project. Reid has been on an anti-Koch kick of late, accusing the billionaire brothers of "buying America."

"Anything that's dirtying the environment, look around and they're involved in it most of the time," said Reid. "It's hard to find anything dirtier than coal. But you look around, you got tar sands -- that beats it."

Kate Sheppard is a Senior Reporter and the Environment and Energy Editor at the Huffington Post. She previously reported for Mother Jones, Grist, and the American Prospect. Her writing has also been featured in the New York Times' Room for Debate blog, the Guardian, Foreign Policy, High Country News, The Center for Public Integrity, In These Times, and Bitch. Her reporting has been recognized with awards from the Society of Environmental Journalists, the Online News Association, and Planned Parenthood. HuffPost's Jennifer Bendery contributed reporting.