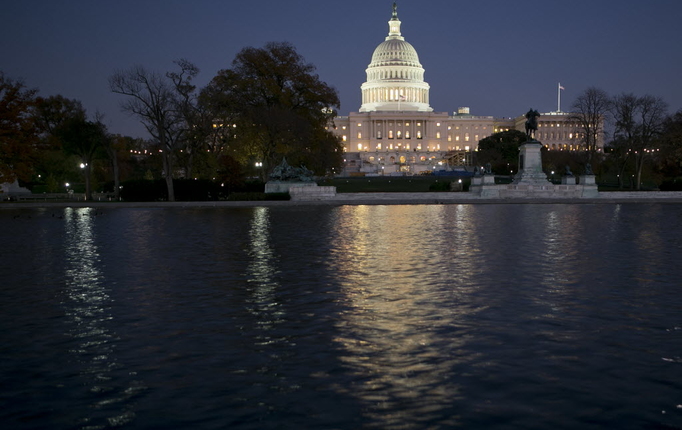 At least 28 Senate Democrats are pulling an all-nighter on Monday to wake up "stubborn" climate change deniers in Congress.

With substantial climate change legislation all but dead in Congress, the senators involved in Monday's climate-fest just want to get to a point where lawmakers can agree that climate change is a scientific fact.

And having the Senate Democratic leadership on their side doesn't hurt, said Sen. Brian Schatz, (D-Hawaii), who helped spearhead the push for congressional action on climate change.

Senate Majority Leader Harry Reid (Nev.) will be among those participating in the talk-a-thon on the Senate floor, along with Sens. Dick Durbin (Ill.), Barbara Boxer (Calif.), and Sheldon Whitehouse (R.I.), along with 22 others.

Notably absent from the marathon session will be the four most vulnerable Senate Democrats up for reelection this year: Sens. Mary Landrieu (La.), Kay Hagan (N.C.), Mark Pryor (Ark.) and Mark Begich (Alaska) are not scheduled to take part, according to a list of speakers.

However, they were invited, Schatz said, adding that their Republican colleagues were verbally invited as well. The response, Schatz admitted was far from enthusiastic.

Republicans aren't budging anytime soon and they likely won't take being cornered by Democrats on climate change lying down.

"Republican's aren't anti-climate policy or anti-mother earth but the policies put forward by Democrats aren't achievable," said Robert Dillon, a top energy adviser to Sen. Lisa Murkowski, (R-Alaska), adding that Republicans are open to real legislation on climate change. "We just don't want to drive the economy off the cliff to do it," he said.

And it's those climate change policies that have Senate Minority Leader Mitch McConnell (R-Ky.) fired up.

McConnell renewed his skepticism of climate change ahead of the all-nighter.

"You're not going to have global cooperation to do it," McConnell said of climate rules on the coal industry. "Even if you conceded the point, which I don't concede, but if you conceded the point, it isn't going to be addressed by one country. So the idea is, we tie our own hands behind our back and others don't. I think it's beyond foolish and real people are being hurt by this," McConnell said.

There aren't any Republican senators signed up for the all-night climate-fest, but Democrats hope to get their attention.

"The impact on our communities is not confined to traditional environmentalist issues anymore, Schatz said in an interview with The Hill. "This is really harming out economy and changing our way of life."

"There is a stubborn group of climate change deniers  and we are hoping to shrink that number. It's hard to predict what their response will be but we welcome a debate on this issue and there is room for conversation for what suite of policy solutions we aught to undertake," Schatz said.

While legislation that establishes a carbon tax on the nation's biggest polluters isn't possible this year, Schatz agrees with Sen. Whitehouse's timeline that one may be be able to pass it a year or two from now.

"There are some bright spots," Schatz said. "John Podesta, the president' new [adviser] is a very good sign. The president has been focused on this issue and is working it into his remarks and every agency is getting involved from the Defense to State Departments."

In their Quadrennial Defense Review released this week, the Department of Defense cited climate change as a valid threat to military installations worldwide.

On Friday, Secretary of State John Kerry stuck by his vow to put climate change at the front of all diplomatic efforts when issuing his first policy guidance to diplomats on the issue.

This article originally appeared in The Hill.