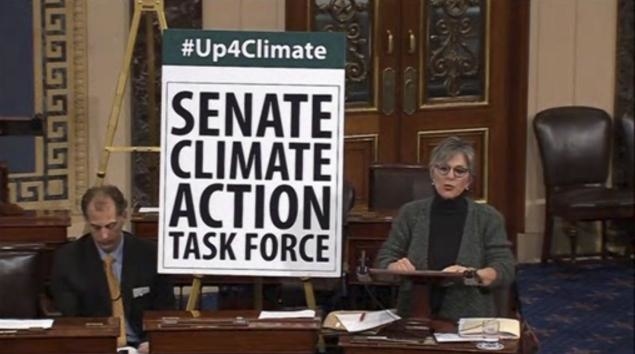 WASHINGTON (AP) —  Democratic senators clocked an all-nighter, working in shifts into Tuesday morning to warn of devastation from climate change and the danger of inaction.

Addressing a nearly empty chamber and visitor gallery, more than two dozen speakers agreed with each other about the need to act on climate change. Naysayers — Republicans — largely stayed away, arguing hours earlier that regulation would cost Americans jobs in a sluggish economy.

Florida Sen. Bill Nelson, who flew aboard the space shuttle Columbia in 1986, said when he looked out at the rim of the earth, "you could see what sustains all of life, the atmosphere. I became more than an environmentalist. I saw in its entirety how fragile this ecosystem is."

Nelson closed out the talk.

"We can translate climate destruction into a positive," insisted Sen. Richard Blumenthal, D-Conn., who spoke about fuel cells built in Danbury and other Connecticut cities. He called climate change "implacable, relentless and only we can stop it."

Hawaii's Brian Schatz said, "Climate change is real, it is caused by humans, and it is solvable."

Republicans challenged Democrats to bring legislation to the floor to address the problem - secure in the knowledge they won't.

"Bring up the carbon tax bill. Put it on the agenda. Let's debate it," said GOP Leader Mitch McConnell of Kentucky. He noted that Democrats failed to pass similar legislation in 2009-2010, when they controlled the 60 Senate seats necessary to overcome any Republican blocking tactics.

In Schatz's view, the debate, such as it was, showed that a growing number of senators are committed to working together on climate change, even if no Republicans were among them. "This is where intractable, longstanding issues get solved," he said of the Senate.

Despite that bravado, Democratic leaders made it clear they have no plans to bring a climate bill to the Senate floor this year. Indeed, the issue is so politically charged that a host of Democrats who face tough re-election fights in the fall opted to skip the session. Sens. Mary Landrieu of Louisiana, Mark Pryor of Arkansas, Mark Begich of Alaska and Kay Hagan of North Carolina were among Democrats who stayed away.

Sen. James Inhofe, R-Okla., said Democrats who showed up were not convincing anyone with their stunt.

"They'll have an audience of themselves, so I hope they enjoy it," Inhofe said about an hour into the marathon, planned to last for nearly 15 hours. Inhofe's speech marked the only time Republicans engaged in the debate. Two other GOP senators, Alabama's Jeff Sessions and McConnell denounced Democrats before the overnight session began.

"It's cruel to tell struggling coal families that they can't have a job because some billionaire from San Francisco disagrees with their line of work," McConnell said. He was referring to Steyer, a former hedge-fund manager and environmentalist who says he will spend $100 million — $50 million of his own money and $50 million from other donors — to make climate change a top-tier issue in the 2014 elections.

Leading off, Senate Majority Leader Harry Reid, D-Nev., called climate change "a question of our own survival" and said the United States and other countries have a responsibility to act "before it is too late."

House Democrats pushed through a bill to limit greenhouse gas emissions blamed for global warming in 2009, then lost their majority the following election. A climate bill led by then-Massachusetts Sen. John Kerry collapsed in 2010 without a vote in the Democratic-controlled Senate.

Sen. Barbara Boxer, D-Calif., said the climate debate, which had its own Twitter hashtag, #Up4Climate, had drawn interest from around the nation and the world. Democrats received two separate petitions urging them to act, with a total of about 100,000 signatures, Boxer said.

"The American people are listening," Boxer said. "They care." She added that the event should "wake up Congress to the dangers of climate change."

Whitehouse said the session was needed to highlight obstacles to climate legislation, including ads financed by Charles and David Koch, conservative activists who have spent $15 million on Senate races, mostly criticizing Democrats over Obamacare. The Koch brothers, whose interests include oil, chemicals, textiles and paper, have also spent millions on ads critical of action against climate change.

Whitehouse conceded that lawmakers do not have the 60 votes needed to act on the matter, even in the Democratic-controlled Senate, but said the speeches could help change the dynamic.

This article originally appeeared in The Associated Press.