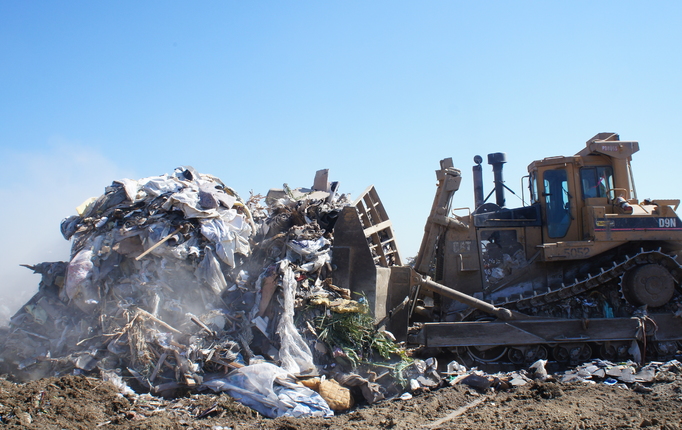 Proponents say that the changes, backed by environmental and labor groups, will keep more garbage out of landfills, cut down on truck traffic and make the industry safer for workers.

Hoping to make Los Angeles a national leader in steering trash away from landfills, the City Council is poised to approve a sweeping and controversial transformation of garbage collection for tens of thousands of businesses and apartment buildings.

The new system, which tightens city control over the commercial trash-hauling market, is expected to win approval Tuesday. Proponents say that the changes, backed by environmental and labor organizations, will keep more garbage out of landfills, cut down on truck traffic and make the industry safer for workers. Business groups argue that they will drive up rates and make it impossible for many smaller haulers to operate.

Currently, landlords for large apartments and businesses choose between scores of trash haulers competing for their business — an estimated $250-million market serving some 63,000 properties, according to the Bureau of Sanitation.

Under a new "exclusive franchise" system, Los Angeles would be divided into 11 zones for garbage collection. Trash companies would compete to win city contracts for each zone, giving them the exclusive right to haul garbage from businesses and larger apartments. San Jose and many Orange County cities use similar systems, but the Los Angeles would be the largest city in the country to impose exclusive franchises.

Environmental and labor groups say the plan will make it easier for Los Angeles to meet a goal of keeping 90% of its waste out of landfills. Successful bidders would have to provide separate bins for recycling and use "clean fuel" vehicles. At large apartment complexes, they would also have to place containers for food scraps and other compostable waste.

The existing trash collection system for businesses is "a kind of Wild West, race-to-the-bottom kind of system with very few standards and systems of accountability," said Linda Escalante, a policy advocate with the Natural Resources Defense Council. "L.A. can become a model city for zero waste."

At Fresh Potato Factory in Northridge, co-owners Shervin Shahidi and Shawn Mahdavian say they pay extra for compostable cups and utensils to help save the environment. But those eco-friendly goods are bound for the same dumpster as the plastic bottles, napkins and other trash from the neighboring businesses at their Reseda Boulevard strip mall.

They decided to back the new system after hearing about it from labor and environmental groups. Haulers wouldn't immediately have to provide separate containers for food scraps and other compostable waste at businesses like theirs, but more "organics recycling" would be phased in over time, according to city documents.

Backers cite other benefits of the new plan: Fewer trucks would crisscross the city, cutting down traffic and pollution from overlapping routes, activists say. To prevent work stoppages, the city also would require garbage companies to reach special agreements with their workers.

"It's easier for the city to manage this system, to hold the hauling industry accountable and responsible," City Councilman Jose Huizar said.

Business groups find the plan troubling. "You're essentially taking away all this business that exists in the city of Los Angeles and wiping it out," said Coby King, chairman of the board of the Valley Industry and Commerce Assn. He added in an email, "These franchises will essentially be monopolies, and as we know monopolies generally lead to higher prices and less service."

King argued that the city could meet its goals by setting standards that haulers must meet, but leaving the market open to any business that qualifies. City Administrative Officer Miguel Santana recommended such a system, writing that it would maintain competition, "the most significant factor in maintaining price controls."

An environmental impact report recently prepared by the Bureau of Sanitation, however, found that such a "non-exclusive" system would do less to diminish air pollution. Bureau director Enrique Zaldivar said he believed the city would get "very, very competitive rates" with exclusive franchises because the hefty city contracts would provide "leverage" to get better deals.

Critics say the new plan is a gambit to reduce the number of trash companies at work in the city, making it easier to unionize more garbage workers. "The environmental benefits are subterfuge for an effort to organize an industry that the unions couldn't organize themselves," said Carol Schatz, president and chief executive of the Central City Assn. of Los Angeles.

Councilmen Mitchell Englander and Bernard Parks, who voted against pursuing the proposal in 2012, continue to have concerns. "We're interjecting ourselves into the business market ... by telling you who's going to pick up your trash," Parks said Monday. "We've turned our back on small, family-oriented haulers."

Despite such worries, the plan is widely expected to pass. City officials aim to put the system into effect by the beginning of 2017. The changes would not affect single-family homes or apartment complexes with four units or fewer, which have their trash collected by city workers.

Two industry groups, the Los Angeles County Disposal Assn. and the Los Angeles County Waste Management Assn., said they have concerns about the plan but are not opposing it at this time. The groups had argued the city should be split into more zones, making it easier for small businesses to compete. Reacting to such concerns, Zaldivar said the proposed plan includes three zones suitable for smaller operators. He also said small haulers could team up to bid for larger zones.

"We're gearing our members up to be competitive in this arena," said Ron Saldana, executive director of the disposal association. "Because this is the arena of the future."

This article originally appared in The Los Angeles Times.