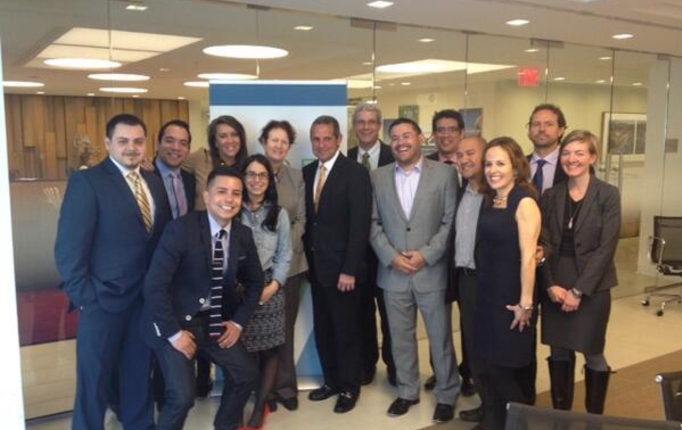 Voces Verdes, a non-partisan coalition of Latino leaders who advocate for sound environmental policy to combat climate change and support clean, renewable energy, made its annual trip to D.C. this past week.  The goal was simple: to make sure that our voices are being heard in Washington.

The Hispanic community is growing: there are 53 million Hispanics in the U.S., making up 17 percent of our population. In another 50 years, this number will more than double to 129 million Hispanics, or 31 percent of the population. As a community, we want action on climate. A recent poll conducted by Latino Decisions for the Natural Resources Defense Council shows that the overwhelming majority of Hispanics are not only concerned about climate change, but also want the government to take aggressive action to combat it. The polling data underscored the urgency of this issue in the Hispanic community: 78 percent of Latinos ‘somewhat to strongly agreed’ that we need strong government actions to limit climate change.  This weekend marked a major step in that direction.

We visited eight different Senate and Congressional offices in the snow! Now that is dedication. During all of our conversations the same theme kept popping up: climate change is not something that we are planning for in the future, it’s something that we are dealing with now. The latest report by the Intergovernmental Panel on Climate Change came out yesterday and it reiterated that the effects of climate change are happening now. The report showed that there are opportunities to respond to them, but the risks grow larger and harder to manage every year. Local officials have recognized the need for action because they are on the front lines of impacts.

While the Federal government has stalled, local leaders have stepped up. Mayors across the country have come together and signed The U.S. Conference of Mayors' Climate Protection Agreement. The agreement strives to meet or exceed Kyoto Protocol targets for reducing global warming pollution by taking actions in their own operations and local communities such as:

These are all steps in the right direction. Our hope is that efforts like those of Voces Verdes begin to open up a path forward on the most critical issue of our time.

On our last day of meetings we had the pleasure of being joined by former Miami Mayor Manny Diaz and NRDC President Frances Beinecke. Discussion turned to the importance of having diverse voices talking about climate change and how it affects our communities. We do a great job talking about immigration, jobs, and education with good reason, but we need to expand our discourse into other issues like climate change that are also having detrimental effects on our community. There is a lot of data showing that Latinos care about climate – now we just have to make sure that we have leaders talking about it, raising this issue in the Latino agenda.

It was a jam-packed two days. There is a lot to do, and Voces Verdes is ready to help tackle it!

Pamela Rivera is the Latino Engagement Associate and Program Assistant for Voces Verdes.