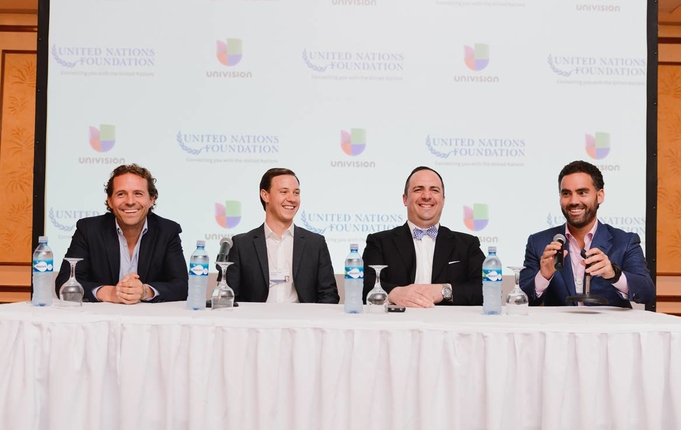 Univision Communications Inc. (UCI), the leading media company serving Hispanic America, and the United Nations Foundation, an international non-profit organization dedicated to helping support the UN in addressing the world's most pressing problems, announced that they have partnered to launch a groundbreaking initiative aimed at increasing awareness about climate change and keeping U.S. Hispanics informed about its effects and innovative solutions in combating the problem. The announcement was made today during the World Economic Forum on Latin America, taking place in Panama City, Panama, April 1-3.

The alliance between UCI and the UN Foundation will generate informative content to increase public awareness about climate change, its global effects, and other environmental issues. The content will be broadcast and published across Univision's TV and digital platforms, as well as on Fusion, a new network launched by Univision and Disney/ABC Television Group. As part of the partnership agreement, Univision News, UCI's award-winning news division, will assign a complete news team exclusively to the initiative, including specialized reporters, investigative journalists, and producers. The UN Foundation will provide support to Univision News by facilitating experts and scientists for interviews and promoting Univision stories and reports on its website and social media platforms, as well as through its different programs.

"In our ongoing effort to inform and empower Hispanic America, it is paramount that increasingly crucial environmental issues such as climate change have a prominent place in our reporting, as they affect our audiences directly," expressed Isaac Lee, President of News, Univision Communications, Inc. "This alliance with the United Nations Foundation will give us direct access to the most up-to-date and reliable global information and resources, as well as to the newsmakers in the field, thereby enriching our news programming in that area."

"This partnership comes at an important moment in our world's history – when issues related to climate change and the environment are at the top of the global agenda and are top of mind for television and digital audiences everywhere," said Aaron H. Sherinian, Vice President, Communications and Public Relations, United Nations Foundation. "The United Nations Foundation is proud to partner with Univision as a media organization that represents a dynamic and growing community that wants to be both active and informed on key global issues. As we work to connect people and ideas with the UN to support global issues, we view this partnership as a valuable resource. Univision is an ideal partner in communicating for positive global change."

More details about the partnership and its ensuing communication initiative will be forthcoming.

About Univision News
Univision's award-winning News division is committed to informing the country's fastest growing segment across all media platforms, including TV, Radio, and Interactive. Hispanics count on the latest and most relevant content that impacts the community through: "Noticiero Univision," the Network's evening, late evening and weekend national newscast; Sunday public affairs program "Al Punto" (To The Point); newsmagazine shows "Aquí y Ahora" (Here and Now) and "Primer Impacto" (First Impact); as well as morning news segments on "Despierta América" (Wake Up America). In the last year, Univision has strengthened its news team and expanded its news operations by adding Investigative and Documentary Units.

About The United Nations Foundation
The United Nations Foundation builds public-private partnerships to address the world's most pressing problems, and broadens support for the United Nations through advocacy and public outreach. Through innovative campaigns and initiatives, the Foundation connects people, ideas, and resources to help the UN solve global problems. The Foundation was created in 1998 as a U.S. public charity by entrepreneur and philanthropist Ted Turner and now is supported by global corporations, foundations, governments, and individuals. For more information, visit http://www.unfoundation.org.

This press release can also be read at Digital Journal.