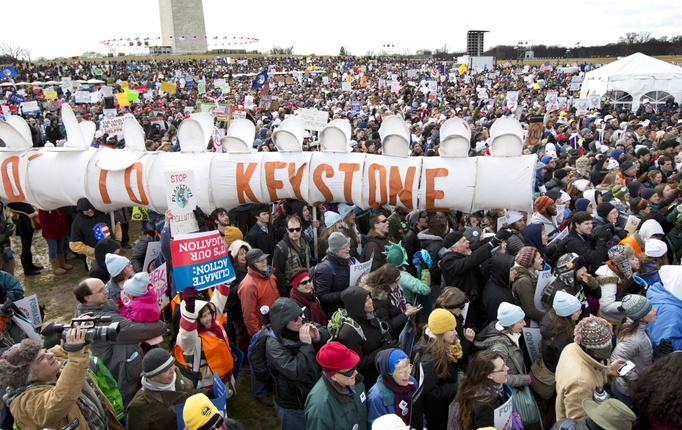 If President Obama gives the green light to the controversial Keystone XL pipeline, Hispanics will be the ones who suffer, a leading Latino political organizing group said Thursday.

The 300,000-member group, Presente.org, is calling on President Obama to reject the pipeline, which would bring Canadian tar sands oil down to refineries in nearby Texas and Louisiana cities. According to Presente executive director Arturo Carmona, the communities that surround those refineries are largely Latino, meaning any accident involving the heavy crude oil would disproportionately impact Hispanic families.

Carmona also said Keystone XL’s potential contribution to climate change would harm Latinos, as those communities tend to be heavily concentrated in coastal and drought-stricken areas of the United States that are more susceptible to damage from climate-related events.

“It’s very important to us that Latinos and Latino voices are involved and critical of these decisions, particularly around Keystone XL” Carmona told ThinkProgress. “Our communities are most threatened by rising sea levels and other issues raised by climate change.”

If approved, the Keystone XL pipeline would have the capacity to transport 830,000 barrels of oil per day to refineries in Texas and Louisiana. Those include refineries located in both Houston and Baytown, Texas. Those cities are in Harris County, which has a Hispanic population of 1.73 million — the second largest Hispanic population in the United States.

The other cities that house potential Keystone XL refineries — Port Arthur and Nederland, Texas and Lake Charles, Louisiana — have smaller, but still significant Latino populations. According to 2010 Census information, Latinos in Port Arthur make up 29.58 of the population, and Nederland has a Hispanic population of 10.66 percent. Lake Charles is only 2.87 percent Latino.

Carmona says that his group — the largest online Latino organizing group in the country — announced its opposition to the pipeline to try and get a response from the Obama administration. The President has generally received high approval ratings from Hispanic voters, but according to March stastics from the Pew Research Center, support has been slipping in recent months.

“One of the things that we’re concerned about [is] that we have not seen, insofar as I’ve been able to analyze, the administration make a concerted effort to address these concerns,” Carmona said.

Climate change and environmental issues are huge for Latino voters. Recent polling from the National Resources Defense Council found that the issues were almost as important as immigration, with 9 out of 10 respondents favoring taking action on climate change.

Latinos have good reason to care about the health effects of pollution. About half the nation’s Latino population lives in regions that often violate clean air rules, and Latinos are three times more likely to die from asthma than other racial or ethnic groups, according to the National Hispanic Medical Association.

Poor Latinos are particularly at risk. According to a 2011 Centers for Disease Control and Prevention report, nearly one in four low-income Hispanic or Puerto-Rican children in the U.S. have been diagnosed with asthma, compared to about one in 13 middle-class or wealthy white children.

Emily Atkin is a Reporter for Climate Progress. She is a native of New York’s Hudson Valley, and holds a B.A. in Journalism from the State University of New York at New Paltz. Before joining the team at American Progress, she worked as a news-gatherer and reporter covering litigation and policy for the legal newswire Law360. Emily has also held internships with the New York Observer, the Legislative Gazette and investigative reporter Wayne Barrett.