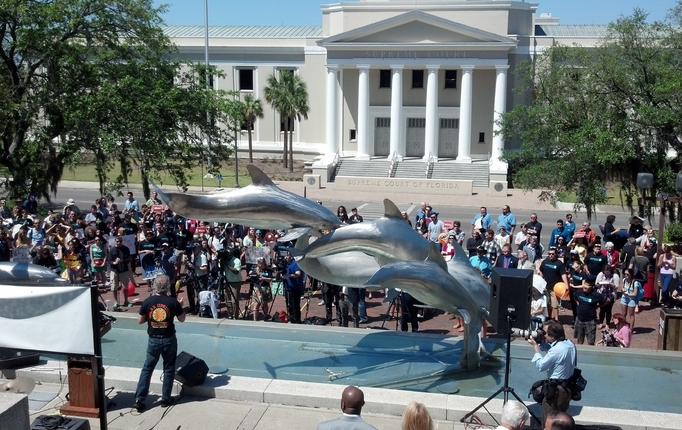 Former Governor Charlie Crist showed up on Thursday at the back door of the state capitol, where he once had the best office. It was a rally for solar energy, and Crist told the crowd all they needed was a Democratic victory in November for their solar dreams to come true.

This was the Solar Uprising, organized by the Southern Alliance for Clean Energy at the capital. And the message for hundreds of college students, activists and solar energy entrepreneurs was this: That despite its natural gifts and solar potential, Florida has no solar energy policy and trails sadly behind much smaller and shadier states. Charlie Crist told the crowd, there's an obvious solution.

"There is a cloud blocking the sun from coming in and its name is Rick Scott", Crist said. "We've gotta stop Scott! We do!"

This was not the flip-flop of a newly-converted Democrat. Crist supported solar energy as a Republican governor but, even then, could get no clean energy programs past the Republican Legislature. Why would he think he'd be more successful as a Democrat?

Clean energy is an issue that crosses ideological lines, as the candidate witnessed in Tallahassee. One of the speakers who preceded Crist was Deborah Dooley, head of the Atlanta Tea Party. She said she likes Gov. Rick Scott, but he's wrong on solar energy.