Voces in Action
For Obama, a renewed focus on climate
View News Categories
+ 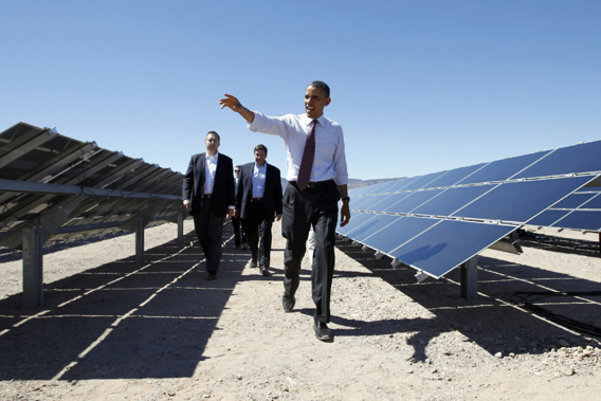 The satellite images viewed by President Obama before a meeting with eight Western governors were stark, showing how snowpack in California’s mountains had shrunk by 86 percent in a single year.

“It was a ‘Houston, we have a problem’ moment,” recalled White House counselor John D. Podesta, one of two aides who briefed the president that February day. Obama mentioned the images several times as he warned the governors that political leaders had no choice but to cope with global warming’s impact.

After years of putting other policy priorities first — and dismaying many liberal allies in the process — Obama is now getting into the weeds on climate change and considers it one of the key components of his legacy, according to aides and advisers.

He is regularly briefed on scientific reports on the issue, including a national climate assessment that he will help showcase Tuesday. He is using his executive authority to cut greenhouse gas emissions from power plants and other sources, and is moving ahead with stricter fuel-efficiency standardsfor the heaviest trucks.

And while he routinely brings up climate change in closed-door meetings with world leaders, according to his aides, he also discusses it in his private life, talking about global warming’s implications with his teenage daughters.

“This is really real for him, in terms of what he’s leaving,” said Cecilia Muñoz, who directs the White House Domestic Policy Council and has helped coordinate federal investment in climate-resilient infrastructure projects. “This is personal for him.”

It’s a notable transformation for a politician who as a senator talked in grand terms about the need to combat global warming but adopted a much more constrained approach in the run-up to his 2012 reelection. Environmentalists also remain anxious about Obama’s delay in making a decision on the Keystone XL pipeline, one of the movement’s signature issues.

Coal and gas industry officials say they are increasingly alarmed by Obama’s focus on climate change, saying administration policies are unrealistic and do not recognize how hydraulic fracturing has transformed the ability to extract oil and gas from the ground.

“They want a complete transformation from the hydrocarbon molecule to the electron, and their refusal to accept reality continues to frustrate me,” said Charles T. Drevna, president of the American Fuel & Petrochemical Manufacturers. “So my question is, why are we doing this? Is it because he promised to do it when he came into office? Is it because he’s got a large donor out there dangling a lot of money? Is it because he really believes it and is passionate about doing it? Or is it all of the above?”

As a senator from Illinois, Obama delivered a major speech on climate change, and he described the night he won the 2008 Democratic presidential nomination as “the moment when the rise of the oceans began to slow and our planet began to heal.” As president, Obama enacted the first carbon limits for cars and light-duty trucks and helped push through a House bill that would have imposed a national limit on greenhouse gas emissions.

But that 2009 measure stalled in the Senate, and during his first term the president’s top aides were sharply divided on how aggressively to push climate policy at a time when Americans were anxious about the economy, according to several former senior administration officials who spoke on the condition of anonymity to discuss internal deliberations. Appointees including Lisa P. Jackson, who served as Environmental Protection Agency administrator, and John P. Holdren, assistant to the president for science and technology, argued that he needed to take the issue on; White House aides such as senior adviser David Axelrod and two chiefs of staff — Rahm Emanuel and William M. Daley — considered it a liability.

“There was a sense then it just wasn’t the sort of thing you could tee up in [2011], with an election coming up,” Daley said in an interview. “With respect to my friends in the environment community, to put this at the front of the list, you might as well have taken a gun to your head and shot yourself.”

At the same time, administration officials watched as natural gas production exploded in the United States, providing utilities, manufacturers and other industries with a less-carbon-intense form of energy. Jason Bordoff, senior director for energy and climate change at the National Security Council during the first term, said the president came to embrace an “all of the above” energy strategy because he saw the economic benefits associated with natural gas and the role that it could play in bridging the nation’s transition to renewable energy.

“I don’t think ‘all of the above’ is just a slogan,” said Bordoff, now a professor of international and public affairs at Columbia University. “I think it is what people really think is the right policy approach.”

Even so, Obama has remained wary of some of the risks stemming from hydraulic fracturing, including the release of methane, a potent greenhouse gas. When the subject of natural gas came up during a Nov. 30, 2012, meeting of the President’s Council of Advisors on Science and Technology, Obama turned to Holdren and his deputy assistant for energy and climate change, Heather Zichal.

“Do we have an accurate accounting of methane emissions, and do we have a problem there?” Zichal recalled the president asking. The White House announced a new methane strategy — which will include additional federal regulations — in March.

Hurricane Sandy also helped convince Obama that the United States needs to rethink the way it rebuilds after disasters, aides said. Coal industry officials, such as the president of the American Coalition for Clean Coal Electricity, Robert “Mike” Duncan, said that approach is misguided and aims to drum up support for more-aggressive climate regulations.

“He’s spending money, in my view, in the wrong place,” Duncan said in an interview. “He needs to be focused on the economy, and the balance has gotten out of hand.”

For the president — who recognizes that global warming ranks as a low priority among voters — the issue has become as much about evangelizing as rulemaking.

After his reelection, Obama told chief speechwriter Jon Favreau to make climate change “one of the big sections” in his second inaugural address, Favreau recalled. The move surprised even some of his closest aides.

Delivering on that promise of action — through the EPA’s upcoming rule to curb carbon emissions from existing power plants — will spark a political and legal fight, but even some top utility executives say they think they will be able to live with the proposal the EPA will issue in June. Thomas F. Farrell, chief executive of Dominion Resources, said the agency showed flexibility when it imposed limits on mercury in 2011 and appears poised to do so again.

“We don’t set the rules, but we think it’s our job to let the people setting the rules know what their impact will be,” Farrell said. “I think they have been listening to that.”

But Obama still faces the risk of opposition from his left flank. Environmentalists such as Democratic donor and billionaire Tom Steyer want him to veto the Keystone pipeline and wean the nation from natural gas.

Natural Resources Defense Council President Frances Beinecke said of the administration: “We have to increasingly get them to acknowledge that there has to be a major transformation away from fossil fuels.”

The White House has stayed out of the State Department’s review of the pipeline project, according to current and former senior administration officials, though Obama has been briefed on the issue. Top White House aides signed off on the move last month to postpone a decision until after a legal battle over the pipeline’s Nebraska route is resolved.

In the meantime, Obama is pressing the case for carbon cuts abroad as well as domestically. In his recent bilateral discussions with the leaders of Japan, South Korea and the Philippines, the president spent significant time talking about climate, according to aides. He raised concerns with Japanese Prime Minister Shinzo Abe and South Korean President Park Geun-hye about their financing of coal-fired plants in the developing world, aides said.

On Tuesday, the White House’s reinvigorated strategy will be on full display. Back in June 2009, the administration’s low-key launch of its second national climate assessment received only a smattering of coverage from regional papers. This time, Obama will conduct interviews from the White House with local and national TV meteorologists, who will also be briefed by senior administration officials.

Podesta said Americans will be more willing to embrace meaningful limits on carbon emissions once they recognize their impact.

“They’re going to feel risks in their own lives, and then they will be willing to act,” Podesta said.

JULIET EILPERIN joined The Washington Post as the House of Representatives reporter, where she covered the impeachment of Bill Clinton, lobbying, legislation, and four national congressional campaigns. Since April of 2004 she has covered the environment for the national desk, reporting on science, policy and politics in areas including climate change, oceans, and air quality.