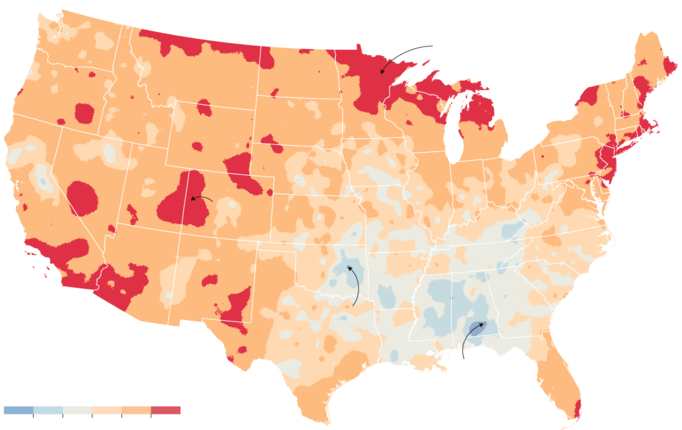 Such sweeping changes have been caused by an average warming of less than 2 degrees Fahrenheit over most land areas of the country in the past century, the scientists found. If greenhouse gases like carbon dioxide and methane continue to escalate at a rapid pace, they said, the warming could conceivably exceed 10 degrees by the end of this century.

“Climate change, once considered an issue for a distant future, has moved firmly into the present,” the scientists declared in a major new report assessing the situation in the United States.

“Summers are longer and hotter, and extended periods of unusual heat last longer than any living American has ever experienced,” the report continued. “Winters are generally shorter and warmer. Rain comes in heavier downpours. People are seeing changes in the length and severity of seasonal allergies, the plant varieties that thrive in their gardens, and the kinds of birds they see in any particular month in their neighborhoods.”

The report is the latest in a series of dire warnings about how the effects of global warming that had been long foreseen by climate scientists are already affecting the planet. Its region-by-region documentation of changes occurring in the United States, and of future risks, makes clear that few places will be unscathed — and some, like northerly areas, are feeling the effects at a swifter pace than had been expected.

Alaska in particular is hard hit. Glaciers and frozen ground in that state are melting, storms are eating away at fragile coastlines no longer protected by winter sea ice, and entire communities are having to flee inland — a precursor of the large-scale changes the report foresees for the rest of the United States.

The study, known as the National Climate Assessment, was prepared by a large scientific panel overseen by the government and received final approval at a meeting Tuesday.

The White House, which released the report, wants to maximize its impact to drum up a sense of urgency among Americans about climate change — and thus to build political support for a contentious new climate change regulation that President Obama plans to issue in June.

But instead of giving a Rose Garden speech, President Obama spent Tuesday giving interviews to local and national weather broadcasters on climate change and extreme weather. The goal was to help Americans connect the vast planetary problem of global warming caused by carbon emissions from cars and coal plants to the changing conditions in their own backyards. It was a strategic decision that senior White House staff members had been planning for months.

Speaking to Al Roker of NBC News, in an interview scheduled to be shown Wednesday morning on the “Today” show, Mr. Obama said “This is not some distant problem of the future. This is a problem that is affecting Americans right now. Whether it means increased flooding, greater vulnerability to drought, more severe wildfires — all these things are having an impact on Americans as we speak.”

In the Northeast, the report found a big increase in torrential rains and risks from a rising sea that could lead to a repeat of the kind of flooding seen in Hurricane Sandy. In the Southwest, the water shortages seen to date are likely just a foretaste of the changes to come, the report found. In that region, the report warned, “severe and sustained drought will stress water sources, already overutilized in many areas, forcing increasing competition among farmers, energy producers, urban dwellers and plant and animal life for the region’s most precious resource.”

The report did find some benefits from climate change in the short run, particularly for the Midwest, such as a longer growing season for crops and a longer shipping season on the Great Lakes. But it warned that these were likely to be countered in the long run by escalating damages, particularly to agriculture.

“Yes, climate change is already here,” said Richard B. Alley, a climate scientist at Pennsylvania State University who was not involved in writing the report. “But the costs so far are still on the low side compared to what will be coming under business as usual by late in this century.”

The report was supervised and approved by a large committee representing a cross section of American society, including representatives of two oil companies. It is the third national report in 14 years, and by far the most urgent in tone, leaving little doubt that the scientists consider climate change an incipient crisis. It is also the most slickly produced, with an elaborate package of interactive graphics on the Internet.

One of the report’s most striking findings concerned the rising frequency of torrential rains. Scientists have expected this effect for decades because more water is evaporating from a warming ocean surface, and the warmer atmosphere is able to hold the excess vapor, which then falls as rain or snow. But even the leading experts have been surprised by the scope of the change.

“It’s a big change,” said Radley M. Horton, a climate scientist at Columbia University in New York who helped write the report. He added that scientists do not fully understand the regional variations.

For instance, large parts of Nashville were devastated by floods in 2010 after nearly 20 inches of rain fell in two days. Last year, parts of Colorado flooded after getting as much rain in a week as normally falls in a year. Just last week, widespread devastation occurred in the Florida Panhandle from rains that may have exceeded two feet in 24 hours.

The new report emphasized that people should not expect global warming to happen at a steady pace, nor at the same rate throughout the country. Bitterly cold winters will continue to occur, the report said, even as they become somewhat less likely. Warming, too, will vary. While most of the country has warmed sharply over the past century, the Southeast has barely warmed at all, and a section of southern Alabama has even cooled slightly.

The report cited the likely role of climate change in causing an outbreak of mountain pine beetles that has devastated millions of acres of pine forest across the American West and the Canadian province of British Columbia; warmer winters and longer summers have let more of the beetles survive and reproduce at an exponential rate. And the report warned of severe, long-lasting heat waves. For instance, it cited research saying the type of record-breaking heat that scorched Texas and Oklahoma in 2011 had become substantially more likely because of the human release of greenhouse gases.

On rising sea levels, the new report went beyond warnings issued in September by the United Nations Intergovernmental Panel on Climate Change, which said that by the end of the century, sea levels could rise by as much as three feet globally if emissions continue at a rapid pace. The American scientists said the rise could be anywhere from one to four feet, and added that six feet could not be ruled out. Along much of the East Coast, the situation will be worse than the global average because the land there is sinking, the scientists said.

The report pointed out that while the country as a whole still had no comprehensive climate legislation, many states and cities had begun to take steps to limit emissions and to adapt to climatic changes that can no longer be avoided. But the report found that these efforts were inadequate.

“There is mounting evidence that harm to the nation will increase substantially in the future unless global emissions of heat-trapping gases are greatly reduced,” the report warned.

JUSTIN GILLIS is an Environmental Journalist for The New York Times.