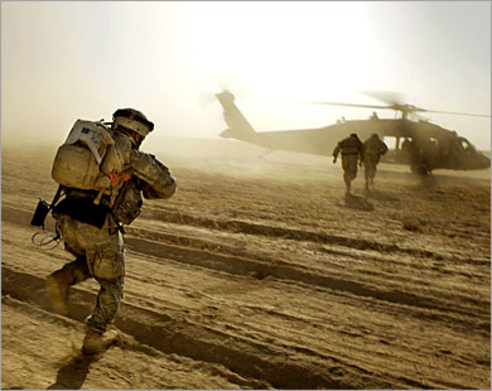 WASHINGTON — The accelerating rate of climate change poses a severe risk to national security and acts as a catalyst for global political conflict, a report published Tuesday by a leading government-funded military research organization concluded.

The CNA Corporation Military Advisory Board found that climate change-induced drought in the Middle East and Africa is leading to conflicts over food and water and escalating longstanding regional and ethnic tensions into violent clashes. The report also found that rising sea levels are putting people and food supplies in vulnerable coastal regions like eastern India, Bangladesh and the Mekong Delta in Vietnam at risk and could lead to a new wave of refugees.

In addition, the report predicted that an increase in catastrophic weather events around the world will create more demand for American troops, even as flooding and extreme weather events at home could damage naval ports and military bases.

In an interview, Secretary of State John Kerry signaled that the report’s findings would influence American foreign policy.

“Tribes are killing each other over water today,” Mr. Kerry said. “Think of what happens if you have massive dislocation, or the drying up of the waters of the Nile, of the major rivers in China and India. The intelligence community takes it seriously, and it’s translated into action.”

Mr. Kerry, who plans to deliver a major speech this summer on the links between climate change and national security, said his remarks would also be aimed at building political support for President Obama’s climate change agenda, including a new regulation to cut pollution from coal-fired power plants that the administration will introduce in June.

“We’re going to try to lay out to people legitimate options for action that are not bank-breaking or negative,” Mr. Kerry said.

Pentagon officials said the report would affect military policy. “The department certainly agrees that climate change is having an impact on national security, whether by increasing global instability, by opening the Arctic or by increasing sea level and storm surge near our coastal installations,” John Conger, the Pentagon’s deputy under secretary of defense for installations and environment, said in a statement. “We are actively integrating climate considerations across the full spectrum of our activities to ensure a ready and resilient force.”

The report on Tuesday follows a recent string of scientific studies that warn that the effects of climate change are already occurring and that flooding, droughts, extreme storms, food and water shortages and damage to infrastructure will occur in the near future.

In March, the Pentagon’s Quadrennial Defense Review, the agency’s main public document describing the current doctrine of the United States military, drew a direct link between the effects of global warming — like rising sea levels and extreme weather patterns — and terrorism.

“These effects are threat multipliers that will aggravate stressors abroad, such as poverty, environmental degradation, political instability and social tensions — conditions that can enable terrorist activity and other forms of violence,” the review said.

Tuesday’s report is an update of a report by the center’s Military Advisory Board in 2007, the first major study to draw the link between climate change and national security. The report’s authors said the biggest change in the seven years between the two studies was the increase in scientific certainty about global warming, and of the link between global warming and security disruptions.

The 2007 report also described climate change as a “threat multiplier” or a problem that could enhance or contribute to already existing causes of global disruption. The 2014 report updates that language, calling climate change a “catalyst for conflict” — a phrase intentionally chosen, the report’s authors said, to signal that climate change is an active, driving force in starting conflict.

“In the past, the thinking was that climate change multiplied the significance of a situation,” said Gen. Charles F. Wald, who contributed to both reports and is retired from the Air Force. “Now we’re saying it’s going to be a direct cause of instability.”

The most recent scientific reports on climate change warn that increasing drought in Africa is now turning arable land to desert. The national security report’s authors conclude that the slow but steady expansion of the Sahara through Mali, which is killing crops and leaving farmers starving, may have been a contributing force in the jihadist uprising in that African country in 2012. Since then, Al Qaeda in the Islamic Maghreb has seized control of northern Mali and remains in conflict with the Malian government.

“Norfolk is so big, it’s so important to the Navy, it’s important to Virginia for jobs, and it would go,” General Wald said.

A scientific report released this week found that global warming has contributed to the melting of a large section of a West Antarctica ice sheet, which could lead to a rise in sea level of 10 feet or more.

Senator James M. Inhofe of Oklahoma, the ranking Republican on the Senate Armed Services Committee and a vocal skeptic of the established science that greenhouse gas emissions contribute to global warming, scoffed at the idea that climate change is linked to national security threats.

“There is no one in more pursuit of publicity than a retired military officer,” he said of the report’s authors. “I look back wistfully at the days of the Cold War. Now you have people who are mentally imbalanced, with the ability to deploy a nuclear weapon. For anyone to say that any type of global warming is anywhere close to the threat that we have with crazy people running around with nuclear weapons, it shows how desperate they are to get the public to buy this.”

Rear Admiral David Titley, a co-author of the report and a meteorologist who is retired from the Navy, said political opposition would not extinguish what he called the indisputable data in the report.

“The ice doesn’t care about politics or who’s caucusing with whom, or Democrats or Republicans,” said Admiral Titley, who now directs the Center for Solutions to Weather and Climate Risk at Pennsylvania State University.