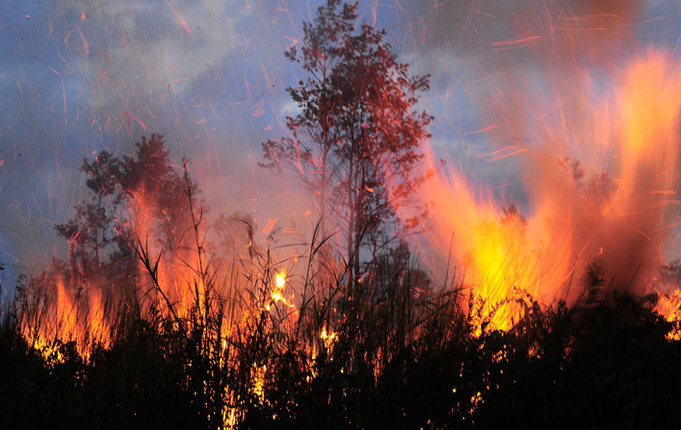 Americans are willing to bear the costs of combating climate change, and most are more likely to support a candidate seeking to address the issue.

By an almost two-to-one margin, 62 percent to 33 percent, Americans say they would pay more for energy if it would mean a reduction in pollution from carbon emissions, according to the Bloomberg National Poll.

While Republicans were split, with 46 percent willing to pay more and 49 percent opposed to it, 82 percent of Democrats and 60 percent of independents say they’d accept higher bills.

“We’re already hitting 110 degrees here,” said Larry McNamed, a 44-year-old independent in Henderson, Nevada. “A lot of people are trying to sweep this under the rug, but we need to do something. It’s only going to get hotter.”

President Barack Obama is moving forward with new rules that would require states to reduce carbon emissions from power plants. The White House sees the plan, released June 2 by the Environmental Protection Agency, as a way to reduce emissions 30 percent by 2030 from 2005 levels.

The administration calculates that utilities and their customers will spend as much as $8.8 billion to comply. Barclays Plc (BARC) has forecast that the rules would add 10 percent to electric utility rates by 2030.

The EPA proposal is likely to be modified during a public comment period, and a bipartisan coalition of coal-state lawmakers have vowed to pass legislation to block them.

“It is a rare poll where people responding will stand up and say ‘tax me,’” said J. Ann Selzer, founder of Des Moines, Iowa-based Selzer & Co., which conducted the June 6-9 poll of 1,005 U.S. adults that has a margin of error of plus or minus 3.1 percentage points.

Obama’s proposal has divided his party along regional lines. While Democratic Senate candidates in Iowa and Colorado back the emission limits, others in coal-states such as West Virginia and Kentucky have distanced themselves from them.

More than half of all Americans and majorities of female, young, and independent respondents who plan to vote in the midterm elections say candidates who support measures to curb climate change are more likely to win their backing.

“Climate change is going to be a disaster for my grandchildren and their grandchildren,” said Lori Hartman, a retired teacher in Buffalo, New York. “They have to do something right now -- not years from now.”

A majority of Americans see climate change as a threat, with 46 percent classifying it as a “major” threat and 27 percent as a “minor threat.” Half would like the federal government to adopt policies to combat it in the next decade.

Yet while Americans back taking action on climate change, 53 percent doubt the president’s assertion that a reduction of soot and smog will lead to substantial health benefits.

Seventy-three percent of Republicans, 60 percent of independents, and 30 percent of Democrats said the new standards won’t reduce the number of cases of asthma and other respiratory diseases.

“It’s not going to work unless the rest of the world is going to do it, too,” said Betty Wieland, 77, a retired nurse from Modesto, California. “China is more than making up for anything we do in climate change.”

Support for action falls along party lines. Seventy percent of Democrats and 51 of independents say they are more likely to back candidates who call for taking action on climate change, compared with just 28 percent of Republicans.

The public also is split on the scientific underpinnings of climate change. Forty-eight percent say they “trust” warnings from scientists about the problem, while 43 percent say scientists “manipulate their findings for political reasons.”

“There are more important things for me to vote on,” said Anthony Farah, 35, of San Antonio. “Taxes, immigration, health-care reform, the economy -- I’d put those things before climate change.”

LISA LERER is a Reporter for Bloomberg News in Washington

This article originally appeared in Bloomberg.