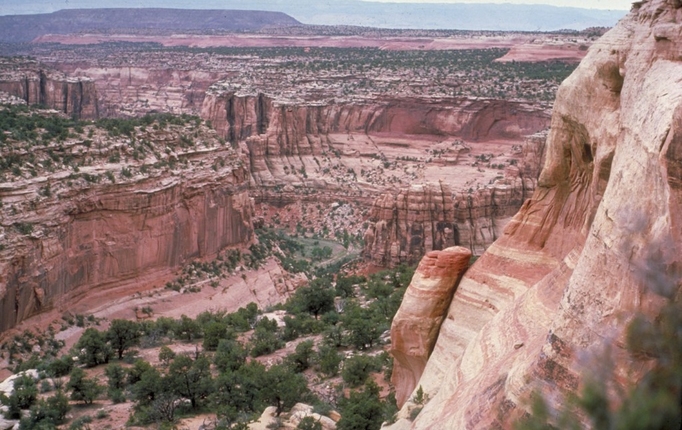 Washington, DC — On June 11, we announced the results of a poll conducted for HECHO in Colorado and New Mexico by Latino Decisions.

The poll found that a staggering 93% of respondents believe that the government should protect public lands for recreation and the overall well-being of the environment. The results make it clear that this connection to the land occurs irrespective of party affiliation, across age demographics, and that public lands are integral to the daily life of Latinos in the southwest for recreation such as hiking, fishing, hunting, or camping.

Equally strong support, 96% in Colorado and 94% in New Mexico, was found on a question of whether the government should consult with Latino communities to help identify historic lands important to our heritage before leasing public lands for oil and gas drilling.

“This poll confirms that Latinos are conservationists, but the astounding level of support for common sense policies that protect our public lands and areas our families use for recreation is remarkable,” said Rod Torrez, Director of HECHO. “We think these results highlight that policy makers and industry leaders must listen to our community and involve Latinos in the process of leasing our public lands so that we can achieve a more balanced approach.”

An overwhelming 77% of Latinos polled in both states, support a plan requiring oil companies to pay royalties on natural gas they burn in the extraction process in order to pay for pollution mitigation efforts and to support conservation programs. Support for holding the oil and gas industry accountable on this issue transcends political ideology, age, and even income, with the highest support, 90%, from political independents.

The poll further shows that 73% of respondents would support a candidate who favors conservation policies over one who does not. Specifically, 68% in Colorado and 72% in New Mexico would favor a candidate who supports requiring oil and gas companies to prove their development efforts would not harm the environment or limit access to public lands.  That’s especially significant given that 41% in Colorado and 44% in New Mexico acknowledge that natural gas extraction has the potential to create jobs.

“What these results really highlight is that partisanship doesn’t play a role when it comes to conservation and our cultural ties to public lands,” added Gabriel Sanchez, Research Director for Latino Decisions, one of the nation’s leading Latino political opinion research firms. “Latino registered voters, whether they’re Democrats, Republicans, or Independents in these states clearly understand the issues around conservation and oil and gas development. Even when they acknowledge the job creation potential of natural gas extraction, huge numbers expect their government to protect public lands, and want to hold the industry accountable.”

The poll additionally reflects Latino participation in the recreation economy, finding that in the last 12 months, 88% of Latino voters in these states purchased equipment for outdoor activities, with 54% in Colorado and 57% in New Mexico spending more than $250.

“These results reflect a reality in the Latino community that’s borne out of who we are,” added Torrez. “When I think about these policy issues, they’re not abstract concepts. My mind goes back to frigid mornings in the Rockies with my Dad and my brothers, the hours crouched in silence, waiting for deer to come across whatever draw or valley we had in our sights. That’s real, and it illustrates why we as a community expect to have our voices heard on issues that potentially threaten access to the land we’ve grown up in.”

“Latino sportsmen and families who value the outdoors want their voices to be heard, and want to help shape decisions about the use of our public lands,” added Max Trujillo, HECHO’s Deputy Director. “We hear that on the ground in these states every day, and it’s reassuring to see that this poll reflects just how strong that sentiment really is in the Latino community.”

Latino Decisions conducted this poll through interviews with 400 Latino registered voters, 200 in each state, from May 27 through June 10, 2014. A blended sample of landline telephones, cell phones, and the Latino Decisions online web panel was used. Interviews were conducted in English or Spanish, at their discretion by fully bilingual interviewers.

This article originally appeared in HECHO