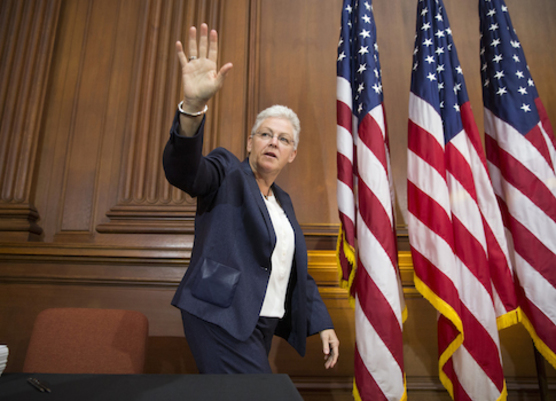 Over the past few months, federal policy has taken a small but significant step forward in the battle to curb fossil fuel emissions. Still, nothing the White House does on its own will be sufficient to meet the challenge, something Environmental Protection Agency (EPA) administrator Gina McCarthy tacitly acknowledged on Thursday. In a speech to George Mason University’s Washington Youth Summit on the Environment, she argued for a society-wide mobilization to soften the blow of climate change.

“It’s going to need everybody at the table,” she said, addressing an audience of 250 high school students from around the country. “We’re going to have to roll up our sleeves.”

The speech was yet another stop on the Obama administration’s long climate mitigation publicity tour, launched as part of the White House’s “year of action” on climate change. Compared to the State Department’s big conference on ocean conservation the week before, McCarthy’s speech was a minor event; but the emphasis she placed on collective action served as yet another hint that the White House doesn’t believe it can dictate climate change mitigation solely from the top down.

In fact, the Obama administration’s emerging environmental strategy relies heavily on collaboration with state policymakers, private enterprise, and philanthropic groups. Thus the aforementioned Our Ocean Conference included an announcement from actor Leonardo DiCaprio that his foundation would be dedicating $7 million to ocean conservation; the EPA’s new emissions targets for power plants give the states broad latitude when it comes to implementation; and White House officials are huddling with members of the insurance industry to discuss how the risks of climate change should be priced.

Environmental activists, such as those in the anti-Keystone XL movement, are the one group that has thus far appeared to be notably absent from that huddle. The White House keeps postponing a decision on the proposed Keystone pipeline extension, and its “all of the above” approach to energy policy condones fracking, to the consternation of liberal green groups. Yet McCarthy’s remarks on Thursday sounded an awful lot like incitement to further grassroots activism, particularly when she discussed the rapid change in federal environmental policy which took place in the ’60s and ’70s.

“It changed as a result of Congress stepping up and saying we can’t do this anymore,” said McCarthy. “They only stepped up because the people that they served demanded it. Because everybody could see the problems we were facing.”

President Obama himself appeared to sound a dogwhistle in the general direction of the green movement earlier this month, when during a commencement speech at UC Irvine he suggested that Americans should “invest in what helps, and divest from what harms” climate change mitigation. Fossil fuel divestment – the campaign to reduce investments in major carbon polluters – is a key grassroots push which the green movement hopes will weaken its foes in the energy industry. Before the fall of the apartheid regime, activists in the United States and around the world launched a divestment campaign to put economic pressure on the South African ruling class.

But although the Obama administration might support a bottom-up environmental movement in theory, McCarthy floundered somewhat on the details. Later that day, in a Google+ chat regarding global warming’s effect on the Latino community, McCarthy answered a question about what ordinary people could do to help by running through a list of various consumer choices: fuel efficient vehicles, recycling, house weatherization, and so on.

“Every little bit helps,” said McCarthy. What’s less clear is whether all those little bits are actually sufficient—or even anywhere close.

This article originally appeared on MSNBC.