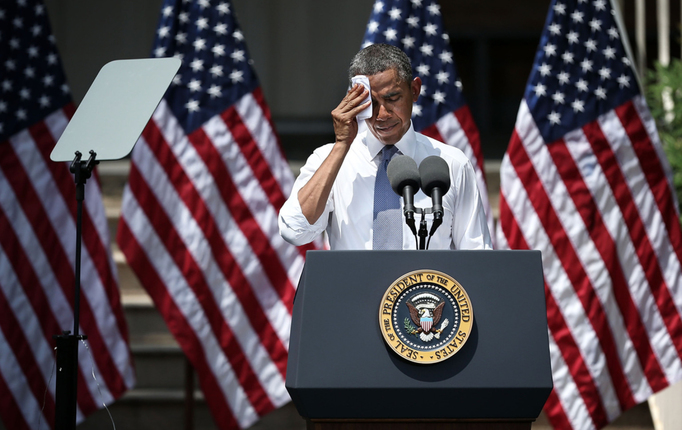 In his ongoing effort to combat climate change through executive authority, President Obama announced Wednesday a series of investments to support communities across the country as they prepare for the worst effects yet to come.

The millions provided will give communities and states the funds to shore up their vulnerabilities, as well as “create jobs, provide certainty to states and communities, support American businesses, and grow our economy,” a statement from the White House said.

The president has made it a second-term priority to tackle climate change, as Republicans routinely deny that the Earth’s temperature is warming and dramatically altering weather patterns. Last month, he announced an Environment Protection Agency ruling that would curb carbon emissions by a third over the next 16 years. The Supreme Court struck down parts of the ruling, but the cuts largely remained in place.

The vast majority of the funds announced today—236.3 million—will go towards improving a nation’s rural electric system in eight states.

“A modern, reliable electric system is critical to attract and retain residents and businesses in rural communities,” the release read saying they hoped using smart grid technologies would increase the reliability of the electric system and bring more jobs into rural areas. An undisclosed amount will also be allocated to rural areas to improve their access to clean drinking water during emergencies and droughts.

Other sizable grants will go towards educating and preparing Indian tribes for the extreme weather patterns and other effects of climate change and improving the 3-D mapping of the country to help officials plan for floods and coastal erosion.

The announcement explains how various federal agencies are deploying resources to improve the country’s preparedness: FEMA will also be expanding its disaster planning to mitigate for climate change effects and pushing states to do the same; the National Oceanic and Atmospheric Administration will update its coastal management programs and guidelines and offer up competitive funds to states looking to update their own programs; the EPA will lead a number of federal agencies, NGOs, and private sector groups to advance green stormwater infrastructure; the Centers for Disease Control and Prevention is releasing a guide on the health risks the country faces due to climate change, like the surge of heat-related illnesses.

The funds are allocated based on initial recommendations from a task force Obama established last November and are in conjunction with the National Disaster Resilience Competition, a billion dollar program announced last month, that pushes communities to compete for funding to prepare themselves for climate-related disaster.

Last May, the amount of carbon dioxide in Earth’s atmosphere surpassed 400 parts per million (ppm) for the first time in the history of the human species, a reflection of how much pollution continues to be pumped into the atmosphere. As of last month, industrial civilization has won another dubious achievement: A record-breaking concentration of 400 ppm for three months straight.

This article originally appeared on MSNBC.