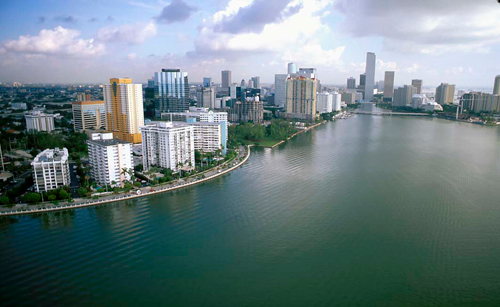 In an effort to push Gov. Rick Scott into the debate on climate change, 10 prominent scientists from the state’s top universities on Tuesday asked for an opportunity to explain to him the impact human-induced global warming will have on Florida.

“We note you have been asked several times about how, as Governor, you will handle the issue of climate change,” the professors wrote in a two-page letter to Scott. “You responded that you are ‘not a scientist.’ We are scientists and we would like the opportunity to explain what is at stake for our state.”

Scott initially denied the impact of human-induced global warming when he first ran for office in 2010, saying he has “not been convinced that there's any man-made climate change.” He has since been reluctant to engage on the issue, answering only, “ I’m not a scientist,” when asked about it.

The scientists, who are at the top of their fields at the universities of Miami, Florida State, Florida International and Eckerd College, believe they can explain simply why they believe the governor should care.

“Florida is one of the most vulnerable places in the country with respect to climate change, with southeastern Florida of particular concern,” the scientists wrote. “This is not a hypothetical. Thousands of scientists have studied the issue from a variety of angles and disciplines over many decades.

“Those of us signing this letter have spent hundreds of years combined studying this problem, not from any partisan political perspective, but as scientists — seekers of evidence and explanations.”

The issue is likely to gain steam in the months ahead as the governor’s race pits Scott against former Gov. Charlie Crist, who while governor initiated the most aggressive climate-change policies in Florida’s history.

Under pressure from global-warming naysayers, including the conservative Americans For Prosperity and the utility industry, Florida lawmakers have since repealed or defunded most of Crist’s initiatives.

Americans For Prosperity Florida director Chris Hudson said his organization has more than $3 million to spend on statewide education efforts this election cycle and he expects climate change to be an issue this election as well as in 2016.

To push back against that effort, and to keep climate change at the forefront of the debate, a federal super PAC called NextGenClimate has targeted Scott and has identified Florida as one of the seven states it will be pouring money into this election year.

The organization’s strategy includes mobilizing and targeting Hispanic voters in South Florida and the Interstate 4 corridor with information about salt-water intrusion and rising flood insurance costs in coastal communities.

Meanwhile, Scott and his environmental officials face new deadlines under President Obama’s Climate Action Plan. Under the plan, the Environmental Protection Agency has required that states reduce greenhouse gas emissions from future and existing power plants by specific levels by 2030.

Under those rules, Florida must prepare a plan within a year to reduce greenhouse gas emissions by about 38 percent by 2030.

According to the EPA, Florida has the 13th lowest historical fossil fuel emissions of any state. But the EPA gives the advantage to other states over Florida when calculating the 2030 standard because the state doesn't have a robust plan to increase renewable energy output and displace coal-fired fuel generation.

A study by the environmental consulting firm the Brattle Group calculated that the EPA rule will require Florida to reduce its carbon dioxide levels by more than 40 million tons, or about 38 percent, at a cost of about $1.3 billion.

By comparison, states with more aggressive emissions reduction goals — such as California and Oregon — will see no net increase in their carbon reduction costs.

“This is not a ‘save the earth’ message,” he said. “This is about the continued comfort and amiability of civilization, or human beings.”

“I just want him to understand what the situation is — and put it in a historical, million-year context, about what the greenhouse gas history is,” Chanton said.

He explained that ice core records offer a multi-million-year history of the CO2 levels of the earth. During the Ice Age, temperatures went through vast extremes but the CO2 levels didn’t vary more than 100 parts per million — between 180 ppm to 280 ppm.

“When the CO2 levels rose, the temperatures rose” and water that was stored as ice melted to raise the level of the ocreans, he said. “Today, CO2 levels are up to 400 — might we be concerned about the temperature changes?

“It’s not rocket science,” Chanton said. “I can explain it. Give me half an hour.”

This article was originally posted on The Miami Herald.