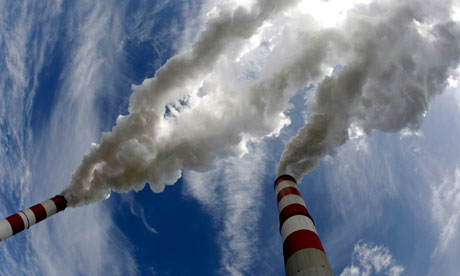 WASHINGTON — Gov. Rick Perry of Texas and Senator James M. Inhofe of Oklahoma are among the most vocal Republican skeptics of the science that burning fossil fuels contributes to global warming, but a new study to be released Thursday found that their states would be among the biggest economic winners under a regulation proposed by President Obama to fight climate change.

The study, conducted by the Center for Strategic and International Studies and the Rhodium Group, both research organizations, concluded that the regulation would cut demand for electricity from coal — the nation’s largest source of carbon pollution — but create robust new demand for natural gas, which has just half the carbon footprint of coal. It found that the demand for natural gas would, in turn, drive job creation, corporate revenue and government royalties in states that produce it, which, in addition to Oklahoma and Texas, include Arkansas and Louisiana.

The report concluded that the rule would hurt states where coal production is a central part of the economy — chiefly Wyoming, the nation’s largest coal producer. States that produce both coal and natural gas, such as Pennsylvania, would experience an economic trade-off as diminished coal production was replaced by new natural gas production.

The study took into account the economic costs imposed by the regulation and concluded that it would raise electricity rates by up to 10 percent in some parts of the country and eventually freeze coal production. But even taking those costs into account, Arkansas, Louisiana, Oklahoma and Texas together would experience an annual net economic benefit of up to about $16 billion, according to the study.

“The irony is that some of the states that have been the loudest in opposing E.P.A. climate regulations have the most to gain in terms of actual economic interest,” said Trevor Houser, an analyst at the Rhodium Group and a co-author of the study.

The report analyzed the economic impact of the rule on 11 regions of the country and found that Arkansas, Louisiana, Oklahoma and Texas would collectively have to make the steepest pollution cuts, per capita, in the nation.

Texas’ reduction alone would account for 19 percent of the nation’s total emission reductions from power plants. But even as the states made those steep cuts, the report found that, over all, their economies would benefit, although at the expense of coal-dependent states.

The gain for Texas would come at the direct expense of coal-producing Wyoming, Mr. Houser said. While Texas currently buys coal from Wyoming and burns it for electricity, it would be able to comply with the new rule by ceasing to buy that coal and instead producing and burning more low-carbon natural gas within the state.

In his book “Fed Up,” Mr. Perry dismissed climate change as a “contrived phony mess that is falling apart.” In a May letter to Mr. Obama, he wrote, “Mr. President, your words promise an energy renaissance while your policies are strangling the energy industry.” Mr. Perry’s office declined to comment on the study, which was to be released Thursday morning.

Mr. Inhofe, who has called climate change at the hands of humans a hoax, did not question the study’s findings and agreed that, in the short term, his state’s economy was likely to benefit from the E.P.A.’s proposed rule. But he said that the uneven impact of the rule nationally — a lift to natural gas-producing states but a hit to coal-producing states — would also be felt in Oklahoma. For example, he said, there are plans to build a new coal mine north of Poteau, Okla. “It’s a very significant part of a somewhat poor part of the state,” he said, adding that “they would be devastated” if the regulation were enacted.

At a hearing of the Senate Committee on Environment and Public Works on Wednesday, Mr. Inhofe signaled that he intended to fight the plan. He asked Gina McCarthy, the administrator of the E.P.A., who was testifying about the climate change regulation, “Say a state like Oklahoma does not develop a plan?”

Under the Clean Air Act, if a state does not submit a plan, the E.P.A. must step in and force the state to comply with a federally developed plan — an outcome that could ignite a standoff between states and the federal government over control of state energy economies.

In a conference call with reporters on Tuesday, Hal Quinn, the president of the National Mining Association, a lobbying group, called the proposed rule “a stunning attempt to completely transform how we generate, transmit and use electricity.” He added, “Americans need E.P.A. to give them a break before it breaks the electric grid and the American economy along with it.”

Senator Mitch McConnell of Kentucky, the chamber’s Republican leader, is already planning legislation to block the rule. For now, any effort in Congress to stop it or roll it back would fail in the Democratic-majority Senate, but that will change if Republicans win a majority in the chamber in the midterm elections this fall.

Mr. McConnell, whose state is one of the nation’s largest producers of coal, sees blocking the climate rule as a top agenda item if the Republicans gain control of the Senate next year.

This articl originally appeared in the the New York Times.