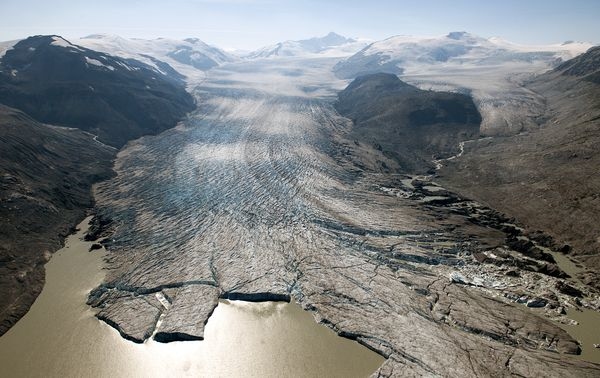 The White House’s Council of Economic Advisors (CEA) released a sweeping report Tuesday on the monetary costs of delaying action on climate change, and it had one glaring conclusion: the longer America waits to act, the more money will be stripped from the U.S. economy.

The report, titled “The Cost of Delaying Action to Stem Climate Change,” looks at climate change policy as a form of insurance — that is, a form of self-protection against various forms of risk. As with insurance, the report found that paying money over time to mitigate the risks of sea level rise, severe weather, drought, and other potential impacts of global warming would be far less expensive if done sooner rather than paying for the aftereffects later, and absolutely less expensive than waiting to deal with more catastrophic climate-related events.

“At this stage, there’s no doubt that climate change is real, that it’s being caused by our activity, that it’s harming the planet and affecting our livelihood,” Council of Economic Advisers chairman Jason Furman told reporters on a press call on Monday. “What this report makes clear is first of all that we know way more than enough to justify acting today; second, that delaying action will increase the cost; and third, the uncertainty of the risk … [is] an argument for acting more today as a form of insurance against the worst consequences in the future.”

The thesis for the CEA’s report is this: If policies aren’t implemented to curb the amount of carbon emitted into the atmosphere, carbon will continue accumulating. As more carbon accumulates, temperatures will rise, increasing the negative impacts of climate change, and thereby increasing economic costs over time.

As the net mitigation costs of dealing with climate change increase, the report found that on average, costs would increase 40 percent for every decade of delay on climate policies. That percentage is based on present value, meaning the total amount the United States would have to pay would be 40 percent larger than it would be today.

In addition, delaying climate policies to the point where average global temperatures rise 3° Celsius above preindustrial levels — as opposed to the internationally agreed-upon limit of 2° Celsius — could increase economic damages by approximately 0.9 percent of global output, the report found. To put that in perspective for the United States, the report noted that 0.9 percent of estimated 2014 U.S. Gross Domestic Product amounted to approximately $150 billion.

“Confronting the possibility of climate catastrophes means taking prudent steps now to reduce the future chances of the most severe consequences of climate change,” the report reads. “The longer that action is postponed, the greater will be the concentration of CO2 in the atmosphere and the greater is the risk.”

The CEA came to its conclusions using what is known as “meta-analysis,” a type of research that puts together the results from different peer-reviewed studies and finds patterns. Furman said CEA researchers looked at 16 different studies with a range of models, and extracted 106 different pairs of observations of the economic costs of climate policies now versus the future.

Researchers also looked at two very different types of costs when it comes to delaying action on climate policies. The first is the cost of additional warming and subsequent damages that results from climate change. These costs are incurred year after year, the report notes, because of the permanent damage caused by additional warming resulting from the delay.

The second type of cost refers to how much more money the United States will have to spend to reduce carbon emissions if the reduction goal is the same as it is now. Obviously if carbon concentrations are higher, it will take more effort — and therefore more money — to reduce that concentration to the same goals we have today.

Because of this, the report refutes the argument generally used by many conservatives that the climate policies being proposed now — such as the EPA’s carbon regulations on coal-fired power plants — cost too much in the short-term.

“This report shows that any short run gains from delay tend to be outweighed by the additional costs arising from the need to adopt a more abrupt and stringent policy later,” it reads. “Furthermore, the research also finds that delay substantially decreases the chances that even
concerted efforts in the future will hit the most aggressive climate targets.”

Furman also noted that spending money on policies to reduce carbon emissions now wouldn’t just be beneficial in fighting climate change. Because carbon pollution generally comes with large plumes of smog, Furman noted carbon-cutting policies would also lead to cleaner air, reducing public health costs. The EPA’s proposed carbon regulations on existing coal plants, for example, are estimated to have a public health benefit of between $55 billion and $93 billion when it is fully implemented.

White House counselor John Podesta, however, acknowledged to reporters on Monday’s call that most Congressional Republicans hadn’t yet shown any signs of being on board with supporting policies to fight climate change.

“Given the lack of productivity on Capitol Hill, we haven’t noticed any signs that [Republicans] want to take this up and work constructively with us,” he said, though he added that he was seeing positive support Republican business stakeholders, governors, and the general public. “The public is solidly on board with the idea that climate change is happening, happening now, that it’s caused by human activity, and they want to see clean energy solutions.”