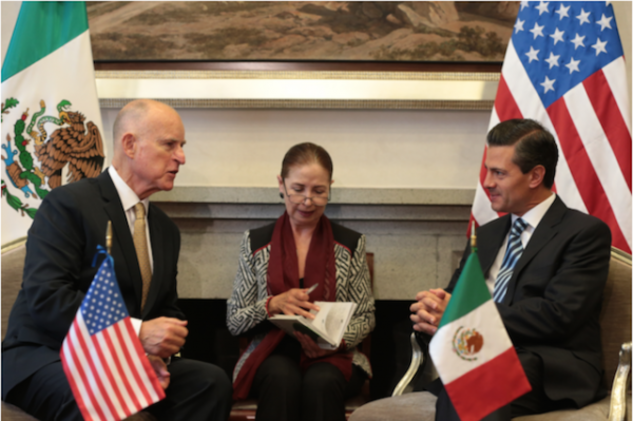 "California and Mexico both take the low-carbon imperative with utmost seriousness," the Democratic governor said. "By this agreement, we intend to work together to dramatically increase solar, wind and other renewable investments."

The pact comes a day after Brown signed a memorandum of understanding to cooperate with Mexico on climate change policies. That agreement provides for sharing details of policies to lower greenhouse gas emissions, including carbon trading programs (ClimateWire, July 29). Like the climate agreement, it is not legally binding.

Solar and wind in border area

An environmentalist accompanying Brown on his trade mission said that the agreement would create jobs and reduce carbon emissions. Both governments have targets for renewable energy currently in place, with California's set at 33 percent by 2020 and Mexico's at 35 percent by 2024.

Improving transmission capacity and reducing the need for new infrastructure will be key to taking full advantage of renewable resources, she added.

"Making the most of the existing electricity grid, prioritizing energy efficiency and building any new infrastructure that is needed in places with the least environmental conflicts are lessons that can extend across the border into Mexico to help build a responsible, sustainable energy future for both countries."

A solar industry official praised the agreement, as well. "While the MOU itself is nonbinding and nonspecific, convening high-level discussions about the policies needed to drive markets for clean energy technologies and climate change solutions between Mexico and California is nothing but good news for the solar industry," said Bernadette Del Chiaro, executive director of the California Solar Energy Industries Association.

Officials from both governments as well as energy companies and environmental groups met yesterday to discuss current energy reforms going on in Mexico and ways companies can invest in the sector. Both Mexico's state-owned oil company, Petróleos Mexicanos (PEMEX), and its state-controlled electricity market, the Federal Electricity Commission, are in the midst of opening to outside investors.

Executives from Sempra Energy and EDF Renewable Energy were scheduled to speak, as well as representatives from California's grid operator, PEMEX and NRDC.