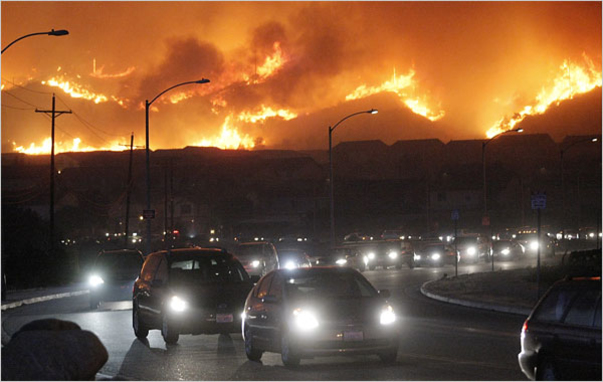 As California declared a state of emergency this week over growing wildfires, the White House played the climate change card on Tuesday to drive home the need for action.

In a new video posted on the White House website, John Holdren, science adviser to President Obama, details the links between higher temperatures and reduced moisture in the soil to the increasing number of wildfires in the western U.S.

"While no single wildfire can be said to be caused by climate change, climate change has been making the fire season in the U.S. longer and on average more intense," Holdren said in the video.

The influence of climate change on the wildfire regime comes not just from the higher summer temperatures and reduced summer soil moisture that go with global warming, but climate change is also bringing us more dead trees — kindling in effect — killed by a combination of heat stress, water stress and attacks by pests and pathogens that multiply faster in a warmer world," he added.

White House climate adviser to the president, John Podesta, sent out a letter on Tuesday about the subject as well, arguing that the devastation caused by raging fires in states like California, Oregon and Washington, make the case for expedited action on climate change policies.

The video resembles one the White House made during the "polar vortex" to push back at claims by climate skeptics that the severe cold snap meant global warming did not exist.

In the earlier video, like the one released this week, Holdren explains that while one wildfire, or one cold snap, does not mean climate change is occurring, together a growing number does.

In Tuesday's video, Holdren says that, on average, annual wildfires in the western U.S. have "increased severalfold in the last decade," and the eight worst years on record for "area burned" by wildfires "have all occurred since 2000."

Across the three West Coast states, roughly 30 major wildfires are raging. California is currently battling over a dozen large fires during the worst drought in the state's history, forcing Gov. Jerry Brown to declare a state of emergency over the weekend.

The devastation to air quality, downstream fisheries, infrastructure, property loss and wildlife, is "too high a price," Podesta and Holdren said on Tuesday.

"Make no mistake: The cost of inaction on wildfires and climate change is too high a price for Americans to pay, particularly when we have a chance to address this right now," Podesta said.

This article originally appeared in The Hill