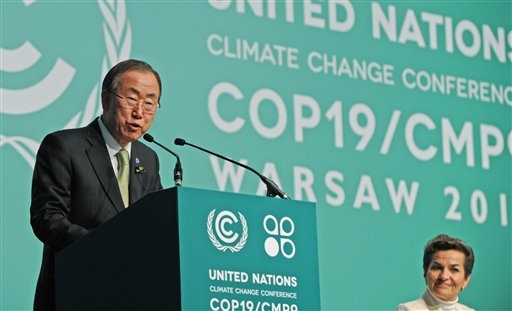 Climate change has been one of my top priorities since the day I took office in 2007. I said then that if we care about our legacy for succeeding generations, this is the time for decisive global action. I have been pleased to see climate change rise on the political agenda and in the consciousness of people worldwide. But I remain alarmed that governments and businesses have still failed to act at the pace and scale needed.

Time is running out. The more we delay, the more we will pay. Climate change is accelerating and human activities are the principal cause, as documented in a series of authoritative scientific reports from the Intergovernmental Panel on Climate Change. The effects are already widespread, costly and consequential -- to agriculture, water resources, human health, and ecosystems on land and in the oceans. Climate change poses sweeping risks for economic stability and the security of nations.

I have traveled the world to see the impacts for myself, from the Arctic to the Antarctic, from the low-lying islands of the Pacific threatened by rising seas to the retreating glaciers of Greenland, the Andes and the Alps. I have seen encroaching deserts in Mongolia and the Sahel and endangered rain forests in Brazil. Everywhere I have talked with people on the front lines who are deeply concerned about the threat of climate change to their way of life and their future.

My travels have also introduced me to growing numbers of people -- from heads of Government to business leaders -- who are prepared to invest political and financial capital in the solutions we need. They understand that climate change is an issue for all people, all businesses, all governments. They recognize that we can avert the risks if we take decisive action now.

Later this month, on September 23, I am convening a Climate Summit at the United Nations in New York. The Summit has two goals: to mobilize political will for a meaningful universal agreement at the climate negotiations in Paris in 2015; and to catalyze ambitious action on the ground to reduce greenhouse gas emissions and strengthen resilience to the changes that are already happening.

I have invited leaders from government, business, finance and civil society to present their vision, make bold announcements and forge new partnerships that will support the transformative change the world needs. The Summit will highlight a number of areas where we feel we can achieve the highest impact, as showcased in this pre-Summit series of blog posts by some of the most influential thinkers and actors in the climate arena.

Climate change is not just an issue for the future, it is an urgent issue for today. Instead of asking if we can afford to act, we should be asking what is stopping us, who is stopping us, and why? Let us join forces to push back against skeptics and entrenched interests. Let us support the scientists, economists, entrepreneurs and investors who can persuade government leaders and policy-makers that now is the time for action.