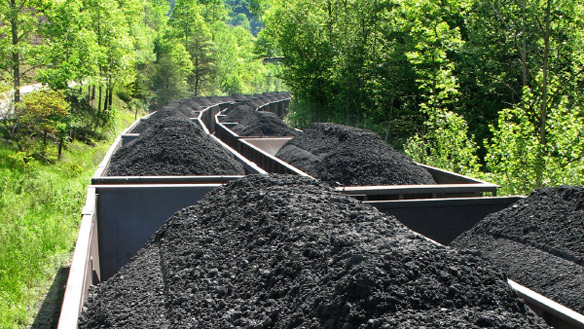 When Oregon state officials last month denied a key permit to a huge proposed facility for exporting coal to Asia, they deepened a geographic divide that is increasingly shaping the U.S. energy debate.

The Oregon decision blocked an ambitious export plan from Australia-based Ambre Energy. Ambre wanted to send coal by train and barge from the Powder River Basin in Wyoming and Montana to a new terminal in Boardman, Oregon, and then ship up to 8.8 million tons annually to Asia. But Oregon's lands department rejected the plan, concluding it threatened local waterways and impinged on Native Americans' fishing rights.

The decision marked another milestone in the convergence of Oregon, Washington, and California around a regional energy strategy that is defining the green alternative in the national argument over powering America's future. Step by step, the three West Coast states are systematically unplugging from the coal economy—and moving more broadly to embrace a low-carbon strategy meant to reduce the risk of climate change.

This reevaluation comes as the federal Environmental Protection Agency is advancing regulations that would require states to slash their carbon emissions from generating electricity. By disconnecting so thoroughly from coal, the most carbon-intensive fuel, the Pacific states are providing a cutting-edge model for the Democratic-leaning, environmentalist-friendly states (such as those along the East Coast) most likely to embrace those mandates.

Meanwhile, across the geographic divide, conservative red states—many of which produce fossil fuels, rely heavily on coal-fired electricity, or both—are mobilizing against the EPA regulations and the broader energy transition they would promote. Senate Minority Leader Mitch McConnell from coal-dependent Kentucky crystallized this resistance when he said recently that if the GOP takes control of the upper chamber, he would use mandatory spending bills to try to block the EPA rules, possibly risking a government shutdown.

It was a telling juxtaposition that McConnell's comments came just two days after the Oregon ruling against Ambre solidified the West Coast's retreat from coal. With domestic demand threatened, coal companies are betting on increasing exports to Asia. But with the rejection of the Boardman facility, environmentalist-led opposition has now sidelined four of the six coal-export facilities in Oregon and Washington that mining companies initially proposed. All that are left are proposals for two new Washington terminals, and those face a murky future in state environmental studies due by fall 2015. Without Pacific Northwest shipping outlets, the coal-export boom could fizzle.

Simultaneously, the Pacific states are further unwinding their already modest reliance on coal-generated power. Oregon's one in-state coal-fired power plant is slated to close in 2020; Washington's sole plant is scheduled to close in two stages by 2025. As those facilities shut down, the two states' last tie to coal power would come in imports from plants in Montana and Wyoming. But environmentalists led by the Sierra Club have launched a multipronged regulatory and litigation strategy against those imports. Democratic Gov. Jay Inslee of Washington boosted their efforts this spring when he released an energy plan that said the state should eventually eliminate all coal-powered electricity. Oregon's Democratic Gov. John Kitzhaber has also called on his state to further disconnect from coal. Since California has no in-state coal power plants and is on track to eliminate imports of such power under a 2006 law, the Oregon and Washington actions point the West Coast toward becoming the country's "first coal-free region," says Doug Howell, a Sierra Club senior campaign representative.

The power-plant regulations EPA proposed in June could accelerate that process. The three states have started discussions about formally partnering to reduce carbon emissions, perhaps by extending California's path-breaking "cap and trade" law into a regional system; Inslee has asked advisers to produce a plan for limiting his state's carbon emissions in time for him to submit it to the Legislature next year.

All of this sharply contrasts with the trajectory in red states. In August, at a conference sponsored by the conservative Texas Public Policy Foundation, Texas environmental officials hinted they may refuse to submit the state reduction plan the EPA carbon regulations require; one analyst from the foundation urged red states to jointly refuse cooperation in a bid to cripple the EPA rules. That would force EPA to write plans for the noncomplying states, likely delaying enforcement.

Coal won't soon disappear from America's energy mix; it still provides about two-fifths of the nation's total electrical power. California's moderate climate and abundant sun and wind, and the Northwest's cascading hydropower resources also provide the region unusual advantages in decoupling from coal. But the three West Coast states have a combined population larger than the 10 (primarily Rust Belt) states that most rely on coal for electricity. If the Pacific states prove they can affordably power that many people's lives without coal, they may provide a beacon for other states looking to replace the 19th century's dominant fuel with new alternatives for the 21st.

This article orginally appeared in the National Journal.