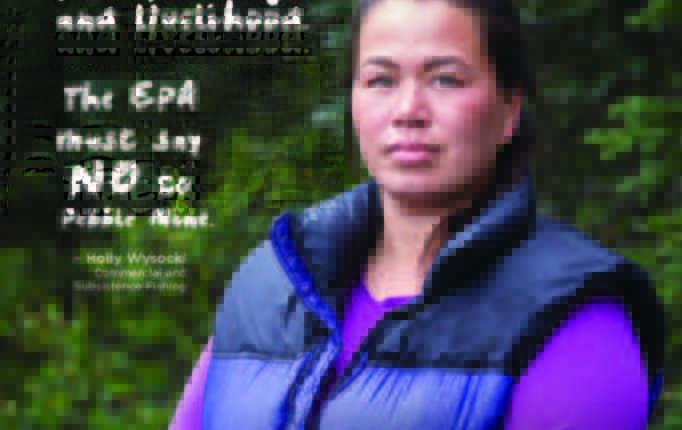 This week we're running a series of ads in Washington, D.C., urging the Obama administration to stop the proposed Pebble Mine. The ads in Politico feature Alaskans from Bristol Bay explaining, in their own words, why it's essential that EPA protect Bristol Bay from the Pebble Mine -- a giant gold and copper mine proposed at the headwaters of the world's greatest wild salmon fishery, valued at $1.5 billion annually. The Bristol Bay fishery is -- and, only if protected, will remain -- the economic engine that sustains the region, its communities, and its people.

Today, you will meet Holly Wysocki, a Bristol Bay native, a life-long subsistence and commercial fisher, and a long-time opponent of the Pebble Mine. Born and still living in the town of Dillingham on the shores of Bristol Bay, Holly's life and that of her family revolve around the wild salmon fishery and depend on its protection -- literally.

Holly's view of the Pebble Mine? "Self-destruction." See for yourself what she had to say about Pebble several years ago in a remarkable television ad from the Renewable Resources Coalition in Anchorage.

Watch in the coming days for more voices from Bristol Bay.

It's time for EPA to stop the massive Pebble Mine. Take action now.