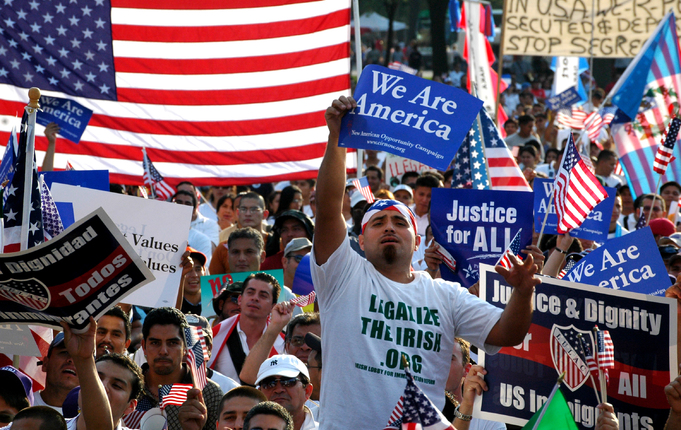 A recent poll of Florida voters showed that Latinos are more concerned about the effects of climate change than voters overall.

All nine surveys conducted since 2011 gauging Hispanics’ views on the environment show that green issues matter. And, now, major environmental groups, from the Sierra Club and the League of Conservation Voters to the Natural Resources Defense Council, are targeting Latinos to bolster their agendas.

Activists believe a tipping point has been reached for the green movement: a shift that political operatives are slowly waking up to and that could be instrumental in their courting of the all-important Latino vote on the eve of midterm elections.

“Contrary to the myth that Latinos are concerned with other issues, such as immigration and the economy, and that environmental issues ranked low among Latinos, our studies show that it’s a top issue for Latinos,” said Adrian Pantoja, senior analyst with political opinion research firm Latino Decisions and politics professor at Pitzer College in Claremont, Calif. “It’s shattering the stereotype.”

“Latinos don’t need the scientific studies to tell them what’s going on in their neighborhoods,” Pantoja said. “We asked ‘Why does this matter to you?’ and a lot of it is tied to their families and their communities.”

Impact close to home, from air quality to open space, is a prime concern. The outcry over environmental racism – the dumping of toxic waste or polluting factories in low-income neighborhoods – has galvanized Latino voters in communities across the country.

In Pomona, Calif., where more than 70 percent of the population is Latino, the city council recently approved a controversial waste transfer station in the city’s poor neighborhoods. The decision was greeted by protesters, many of them Latinos, and chants of "November will smell like trash!” according to local news reports.

The biggest sign that Hispanic voters’ green sensibilities have been overlooked is that there have been few surveys up until recent years looking at their sentiment on the environment, Pantoja said.

“The assumption is that the only issue we, as a community, care about is immigration,” said Adrianna Quintero, senior attorney with the Natural Resources Defense Council and director of Voces Verdes, a Latino outreach program launched in 2008.

Neighborhood concerns may be key, but focus groups also show that Latinos have a strong global concern about the impact of climate change.

“When we talk to Latinos, inevitably a number see how climate change could impact folks back home,” Quintero said. “A mother here would say, ‘I’m really worried about my father who owns a business in El Salvador. If something would happen to him because of these floods, he would lose everything.’”

That connection to loved ones living abroad heightens a broader awareness, she said.

That Latinos care about the environment is no surprise to Leo Murrieta, national field director of the non-profit Mi Familia Vota, a national organization working to increase Hispanics’ civic participation.

“We are some of the original conservationists,” said Murrieta, who emigrated from Mexico when he was seven days old. He said he grew up knowing that water is precious and that open space was important. “If it wasn’t for parks or lakes, open areas or desert that we could go to as kids, we wouldn’t have had any place to go,” Murrieta said. “We were very poor. We didn’t have money to go to Disneyland. So we drove to the park or drove to the lake.”

In the closely contested gubernatorial race in Florida – Republican Gov. Rick Scott against former Gov. Charlie Crist, an independent – rising sea levels caused by climate change are of paramount concern. So is the Latino vote, as both candidates picked Hispanic running mates.

“By 2-to-1, [Florida] Latinos say that climate change is caused by human burning of fossil fuels,” said George Cavros, Florida energy policy attorney with the Southern Alliance for Clean Energy, a non-profit and non-partisan group that polled Florida voters in February. Almost two-thirds said the effects of climate change are already happening, as compared with just over half of all state voters.

That could be a problem for Scott, who has refused to say whether he believes climate change is man-made or a significant threat. He has evaded questions by saying he’s not a scientist. In July, 10 scientists sent Scott a letter offering to explain why climate change poses a threat to Florida. The governor agreed to a half-hour meeting in late August, a move widely seen as an attempt to appease critics less than three months before his re-election poll.

Many believe that going green also means supporting the Democrats.

“It’s just another policy that aligns very closely with the Democratic position,” Pantoja said. “So, the lesson for the Republican party is that it has its work cut out for them if they want to attract Latino voters.”

And candidates should keep in mind that Latinos favor government action to protect the environment, even if it means spending more to do it, he said.

“Climate change, while not a top-tier concern, is an issue that will move voters, especially Latino voters,” said Cavros.

“In a close race, a candidate’s position on tackling climate change can decide the outcome of an election,” he said. “We found that 56 percent of Latinos see climate change as an extremely or very serious issue, compared to 43 percent of all voters.”

In South Florida, the most heavily populated region of the state with a concentration of Cuban and Puerto Rican voters, rising sea levels are an “in-my-backyard” issue. The city of Miami Beach just approved an 84 percent increase in storm-water fees to upgrade infrastructure to withstand rising sea levels. The city is projected to need $300 million for pumps to ease street flooding.

The environment also could be key in the Colorado race for U.S. Senate, pitting Democratic incumbent Mark Udall against Republican Cory Gardner.

The League of Conservation Voters has launched Protégete: Nuestro Aire, Nuestra Salud (Protect Yourself: Our Air, Our Health), a campaign in Colorado to get Latino voters to pressure candidates to take action on air pollution. In Arizona, a similar group is called Chispa (spark). NextGen Climate, a non-partisan organization focused on bringing climate change to the forefront of American politics, is intensifying outreach to Latinos on the environment in both Florida and Colorado.

“The one thing to know about Latino voters, and it’s especially true in California — all of the environmental policies passed because of Latino voters,” said Arturo Vargas, executive director of the National Association of Latino Elected and Appointed Officials. “Bond issues for parks are propositions that passed because Latino voters have gotten behind them.”

Isabel Villalon, Florida Climate & Diversity Manager for the Southern Alliance for Clean Energy, said outreach efforts to the Latino community have intensified. Her group goes to colleges and universities to reach out to students and sets up tables in the Latino community the last Friday of every month. On Sept. 26, it will be at an open-air market in Little Havana and will combine environmental education with a voter registration drive.

“Nine out of 10 Latinos support government taking action to combat the threat of climate change,” she said.

Yet many political strategists don’t yet think that environmental issues will make or break congressional races.

“I don’t think the average voter is going to the poll on climate change,” said Victor Griego, president of Diverse Strategies for Organizing, a Los Angeles consulting firm. “If there is a way to tie it to quality of life, they might. If there’s a toxic dump next to a school, absolutely. But is a day-to-day issue? That’s questionable.”

But Latinos worry more about pollution and green space than protecting the shoreline, he said.

“We’re also seeing that they’re looking for a balance,” Salazar said. “Not only does it depend on the impact on the environment but also on the economic impact of changes in environmental rules and regulations.”

Latinos are more willing to compromise on environmental issues to protect their source of income, he said. Agricultural workers may not be keen, for example, on pesticide restrictions if it is going to affect farm jobs.

“They want clean air as much as anybody else does, but they’re more pragmatic and understand that sometimes it takes a little bit of extra time,” he said.