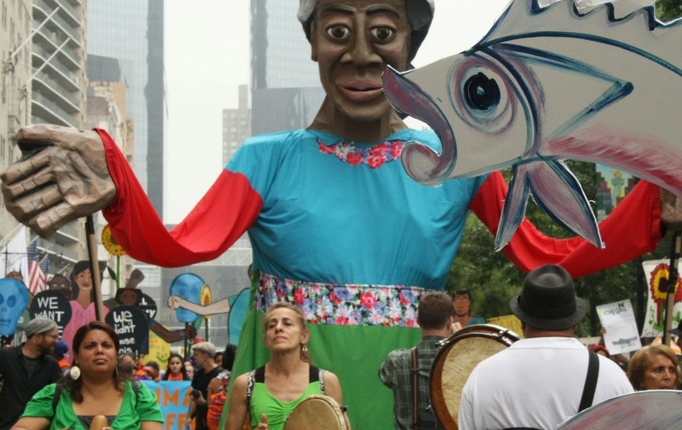 Legions of demonstrators frustrated by international inaction on global warming descended on New York City on Sunday, marching through the heart of Manhattan with a message of alarm for world leaders set to gather this week at the United Nations for a summit meeting on climate change.

Coursing through Midtown, from Columbus Circle to Times Square and the Far West Side, the People’s Climate March was a spectacle even for a city known for doing things big, and it was joined, in solidarity, by demonstrations on Sunday across the globe, from Paris to Papua New Guinea.

“I’m here because I really feel that every major social movement in this country has come when people get together,” said Carol Sutton of Norwalk, Conn., the president of a teachers’ union. “It begins in the streets.”

From the scientists holding an oversize chalkboard to the Hurricane Sandy victims toting life preservers, the march was a self-consciously inclusive affair, with the organizers intent on creating a very big tent, which they hoped would hammer home the relevance of climate change and its effects.

The march attracted leading lights in the environmental movement, most notably former Vice President Al Gore. It drew the secretary general of the United Nations, Ban Ki-moon, who will preside over this week’s United Nations climate summit meeting. And it included Mayor Bill de Blasio of New York, fresh off his announcement that he was committing the city to an 80 percent reduction in greenhouse gases by 2050.

But it was mostly an event for concerned ordinary people, many of them veterans of climate change efforts, others relative newcomers.

From as close as the Bronx and as far as at least Rome, the demonstrators came in vast numbers. At one point early in the afternoon, the march came to a halt because the entire 2.2-mile route was full, and more than two hours into the procession, people were still setting out from the starting point near Columbus Circle.

Organizers, using data provided by 35 crowd spotters and analyzed by a mathematician from Carnegie Mellon University, estimated that 311,000 people marched the route.The signs that marchers held were as varied as the movement: “There Is No Planet B,” “Forests Not for Sale” and “Jobs, Justice, Clean Energy.”

The diversity of the demonstrators made for some odd juxtapositions. On West 58th Street, the minaret of an inflatable mosque bobbed next to a wooden replica of Noah’s Ark the size of a school bus. Nearby, Capuchin Franciscan monks in flowing brown robes, who were in town from Rome for the march, mingled with nuns, while a group flying a pagan flag beat a drum.

The climax of the march came in the early afternoon. All along the route, crowds had been quieted for a moment of silence. On Avenue of the Americas at 57th Street, there was an eerie silence as marchers raised their arms and looked down.

Then at exactly 1 p.m., a whistle pierced the silence, setting off a minute-long cacophony intended as a collective alarm on climate change. There were the beats of the drums and the blaring of horns, but mostly it was whoops and cries of the marchers.

One of the key organizers of the event, the international advocacy group Avaaz, presented a petition with more than 2.1 million signatures demanding action on climate change. “It’s a testament to how powerful this movement is,” Ricken Patel, executive director of Avaaz, said. “People are coming in amazing numbers.”

Like the march, the summit meeting on Tuesday at the United Nations will be flush with speeches intended to build support for addressing climate change. But the gathering of world leaders is not meant to be a formal negotiating session for a potential 2015 agreement.

Behind the scenes, though, the real work toward forging a global deal was underway. A few blocks from the march, in a hotel conference room on Lexington Avenue, Secretary of State John Kerry convened a meeting of foreign ministers of the 17-member Major Economies Forum, focused on climate change, and Todd Stern, the chief United States climate change negotiator, held back-to-back meetings throughout the day.

Mr. Kerry said he intended to keep a focus on climate change throughout the week, despite the pressure of other crises, including insurgent terrorists in Iraq and the Ebola outbreak in Africa. “The grave threat that climate change poses warrants a prominent position on that list,” he told reporters. “Those are immediate. But this has even greater, longer-term consequences that can cost hundreds of billions, trillions of dollars, and lives, and the security of the world.”

Last week, meteorologists at the National Oceanic and Atmospheric Administration announced that this summer — the months of June, July and August — was the hottest on record for the globe, and that 2014 was on track to break the record for the hottest year, set in 2010.

It was concern about the consequences of that warming that drew people to the march, organized by a dozen environmental, labor and social justice groups, and that inspired some of the event’s most sober and most outrageous expressions, some of them not even on the route.

In front of the Flatiron Building, on Fifth Avenue, a 3,000-pound ice sculpture spelled out “The Future.” Dripping onto the sidewalk, it had been carved over two days in Queens by a group of Japanese ice sculptors. “I would say we are melting down the future,” said Nora Ligorano, one of the artists who conceived the work. “It’s a comment on what we are doing to the planet.”

At Columbus Circle, there were bare-breasted women and people with dreadlocks and homespun clothing. There were Muslim women wearing hijabs and groups of older women with signs proclaiming they were “Grandmas Against Global Warming.” and that “Gray Is Green.”

Two high school seniors from Long Island, Kirsten Cunha and Alexandra Dos Santos, both 17, marched with dust masks over their mouths. “Wearing masks like this could quite possibly be our children’s future,” Ms. Dos Santos said.