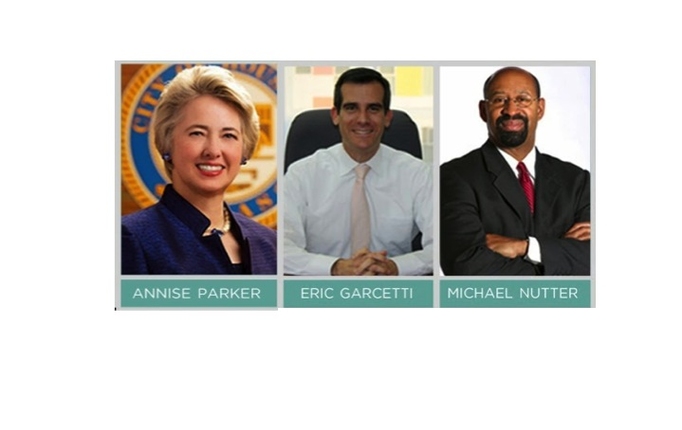 Mayors of three of the nation’s largest cities are pledging to take more action against climate change by implementing new projects to curb greenhouse gas emissions and persuading other leaders to do the same.

Under the plan, the mayors will commit to set or renew aggressive targets for their cities’ greenhouse gas reductions, develop new standards to track and report pollution sources at least once a year, and draft or update climate action plans with specific strategies to control global warming and adapt to its effects.

The mayors will also pledge to identify and develop new emissions-offset projects that could be incorporated into existing carbon markets, such as California’s cap-and-trade program. Projects could include urban forestry, the destruction of ozone-depleting substances and the capture of heat-trapping gases from landfills.

The mayors will also vow to spend the next year recruiting other city leaders across the nation to sign on to the initiative, to be called the Mayors’ National Climate Action Agenda.

By joining, mayors also promise to support federal policies to cut carbon emissions and a binding global climate agreement, and to make equity and environmental justice a priority in climate action plans.

The announcement comes a day after an estimated 310,000 demonstrators marched through Manhattan to demand international action to control climate change, one of thousands of such demonstrations held around the world on Sunday. It follows a similar pledge by Mayor Bill De Blasio of New York to reduce greenhouse gas emissions 80% by 2050, in part by ordering energy-efficiency upgrades to city-owned buildings.

The U.N. summit of more than 100 world leaders in New York, set for Tuesday, is a step toward the next attempt to negotiate a sweeping international agreement to reduce greenhouse gas emissions, scheduled for Paris next year.

The mayors' plan says cities must act on their own because of the U.S. Senate’s unwillingness to ratify an international treaty to reduce emissions of the heat-trapping gases causing global warming. Cities are responsible for about 70% of all greenhouse gas emissions, the mayors say, and are on the front lines of extreme weather events and other effects of climate change.

“Mayors must confront this challenge not only at the local level, but also by calling for binding emission reductions at the federal and global level,” Garcetti said in a written statement.

The three mayors lead the largest cities represented on a climate task force President Obama established last year. Their plan is an outgrowth of several meetings the group of governors, mayors and tribal leaders from across the country have held in Washington, Los Angeles and Des Moines.

This article originally appeared in the LA Times.