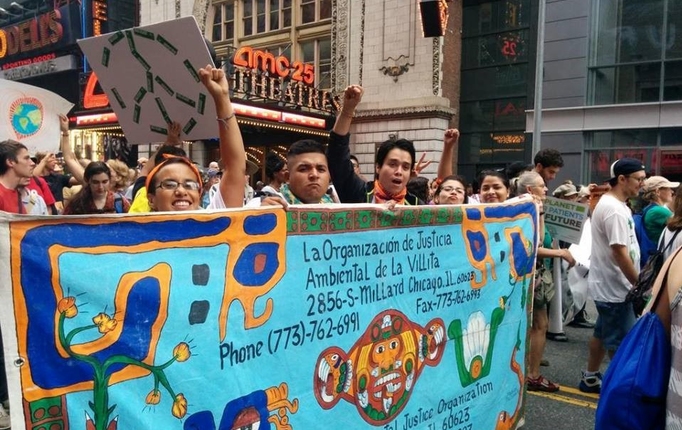 After twenty hours on a charter bus our group of six LVEJO member arrived in Manhattan excited to march in the historic Peoples Climate March.  As an organization that serves a frontline environmental justice community, LVEJO was invited to stand at the front of the march with other environmental justice communities.   Because our bus was late, we had to hustle but we eventually made it all the way to the frontline section.  Moving through the thousands of people in the streets we saw diverse faith communities and organized labor marching behind indigenous peoples and frontline communities.

It was truly amazing to see frontline communities of people of color, youth, and low income whites lead nearly 400,000 people in a spirited marched aimed at elevating the call for an economy that truly serves the people and the planet.  Anahi Tapia , an LVEJO volunteer, reflected “The entire scene depicted a beautifully vivid and legendary image of our power.”

LVEJO board president Mauricio Roman also mentioned that the People’s Climate March and the Flood Wall Street action were staged in the perfect setting as New York is the financial capital of the world.  Roman noted, “To have over 400k people marching and rallying for Climate Justice in Manhattan should be a notice to the multinationals and governments that exploit Mother Earth.”

The following day LVEJO participated in the Peoples Climate Summit at the New School.  We listened to amazing organizers from around the world discuss the alignment of their efforts and the urgency of supporting frontline and indigenous communities.  Hilario Vega explained, “Having the chance to meet and hear the stories of those affected by climate change out here in New York has brought forth the human aspect when dealing with the issue of climate justice.  My experiences have reminded me that people are more than merely statistics, maps, and charts.”

During the evening, LVEJO community organizers and volunteers attended the “Colonialism and Climate Justice: Indigenous World View panel.  At this extraordinary event indigenous women shared the impact that the expansion of the fossil fuel and extreme energy development has had in their communities.  It was a truly powerful conversation and the musical performances were breathtaking.  According to Viviana Moreno, LVEJO’s climate adaptation organizer, “The panel extended beyond the usual academic format as these resilient and empowering group of women decolonized the space through the powers of music storytelling, comedy, prayers, and breathing exercises.”

On the final day of the People Summit, representatives of the Climate Justice Alliance held an action at the United Nations and delivered a strong message to the government leaders meeting at the UN.  “Despite a heightened police presence, leaders from the Our Power Campaign were able to lift a banner and read a powerful letter that denounced the false solutions to climate change so often proposed by governments throughout the world.  We know that our presence and message resonated inside the UN,” explained LVEJO Executive Director Antonio Lopez.

During our three days in New York, we learned so much and met many amazing organizers.  Anahi was really moved by the convening and mentioned, “As a participant of the Peoples Climate March and a person who knows very little about the topic, I can attest this rally as well as the summit panels were empowering.  The Peoples Climate March and Summit helped me connect how the climate crisis intertwines with labor issues, health issues and even immigration issues.”

The local New York City environmental organizations and the Climate Justice Alliance and allies deserve incredible recognition for their tireless efforts that culminated in such historic marches, actions, and dialogues.  We also want to thank the individual donors, Voces Verdes, and the Cricket Island Foundation for providing the funds that made our trip to New York possible.

Whose Power – Our Power!