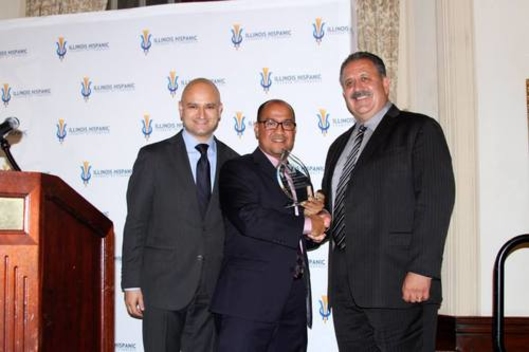 The past week and a half has been an exciting whirlwind of Latino engagement in support of climate action. Two Sundays ago, alongside thousands of other Latinos, I had the chance to participate in the People’s Climate March in New York along with 400,000 people from every corner of our nation, calling on the leaders of over 100 nations who participated in the United Nation's hosted Climate Summit to take action against the sources and threat of climate change.

My 5 am bike ride across the mall was full of symbolism – the peaceful lit up Capitol silhouette against a backdrop of pitch black DC sky belied the tumultuous path of climate and clean energy legislation in the House and Senate.

Besides NRDC colleagues, I was also joined by Voces Verdes’ partner Little Village Environmental Justice Organization (LVEJO), which brought young Latinos in the frontlines of organizing for action and solutions to climate change in Chicago.  The LVEJO delegation shared their experiences and lessons in a simple yet powerful blog.  The people power and energy (pun intended) that I witnessed was proof that the time is ripe for our elected leaders to do what is right for humanity.  It was a powerful memory that I look forward to telling my nieces and my own children someday.

The old saying to think global and act local came to reality the next day when I had the chance to facilitate a meeting with 11 Latino leaders from Virginia on the potential engagement of the Latino community in shaping the state’s plan to meet EPA’s target for carbon emissions from power plants.

In true Voces Verdes form, the roundtable included leaders from two business chambers of commerce, civil and immigrant rights, a solar energy company, and legal professional association. While the range of the leaders’ activism is wide, the group agreed that it is important for Latinos to have a direct say in whether and how Virginia takes action now to combat the threat of climate change. After all, Latinos represent nearly 9 percent of Virginia’s population and with a median age of 27, it will increasingly be their kids who face the consequences of inaction; the National Climate Assessment forecasts that Virginia’s coast will be vulnerable to sea level rise related flooding, heat waves, and hurricanes.  In a state where Latinos are maturing politically – it is widely acknowledged that this community played a key role in electing Governor McAuliffe – their voices and interests on this important issue will carry weight and catch the attention of the policy makers.  Signaling the relevance of larger constituency outreach and engagement, the meeting concluded with a discussion about doing this same type of leader and community engagement in the African American community, which accounts for nearly 20 percent of the state’s population.

Another state where Latinos’ environmental voice carries weight is Illinois.  For the past 5 years, Voces has worked with a network of Latino leaders from the state’s Hispanic chamber of commerce, clean energy business owners, environmental justice and civic leaders engaging them in advocating for the American Clean Energy Act and for the past year, supporting the president’s Climate Action Plan.  Further, the 10 year campaign by the Little Village Environmental Justice Organization (LVEJO) to shut down two of the oldest coal power plants in the mainly Latino communities of Little Village and Pilsen has made the issue of environmental justice and disproportionate impact real for community leaders and organizations in Chicago.

Additionally, some of Voces’ long term partners are in Chicago and include sustainable construction companies (GSG construction consultants), our own board member Roberto Carmona, academic leaders (Dr. Teresa Cordova), and the Illinois Hispanic chamber of commerce.  It is only fitting then that we ended a great week by presenting the 2014 Voces Verdes Green Leadership Award to Mr. Cesar Dovalina Jr., founder and CEO ofCristina Foods, Inc. Along with his business partner Peter Testa, Mr. Dovalina Jr. runs his business from the only LEED Platinum food distribution facility in the country, which generates 35 percent of its energy through a wind turbine and solar panels as well as nearly 70 percent of its non-potable water from roof gardens and rain water catch pipes and filtration containers.  Additionally, he seeks out produce from local or nearby farmers from Michigan, Indiana, and surrounding states. Mr. Dovalina Jr. believes in sustainability not just as a business model but as a legacy that he can share with youth. Though initially hesitant to make remarks, Mr. Dovalina Jr. shared a story of the high school and vocational students whom he takes to the Michigan farms so that they can learn about agriculture and food distribution.

As I stood on the podium looking out at nearly one hundred Latino business leaders and introduced Mr. Dovalina Jr., I felt humbled and excited about the countless introductory coffee meetings and visits I’ve made over the past year.  Rather than theorize or extrapolate about the potential role of Latinos in our economy or politics, I’ve had the chance to capture and amplify the numerous and diverse ways in which we are already making our mark and often leading in the effort to remake and recharge the way we generate, use, and balance our energy needs while protecting public health and our environment.

The nearly 80 Voces Latino leaders from business, elected and public office, academia, medical and public health, community and civil rights arenas are poised to make their voices heard both in their home states and at the national level to make sure that we finally limit carbon emissions from power plants and significantly shift our country toward cleaner sources of energy in ways that honor our commitment to our children and grandchildren; for as the old proverb tell us “we do not inherit the earth from our ancestors; we borrow it from our children.” I am borrowing this earth from Lily Starr and Lucy Luv, my beautiful nieces and sources of inspiration.

This piece originally appeared in the NRDC Blog