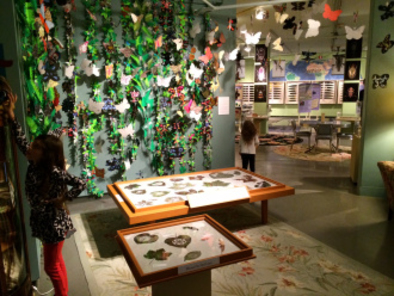 "Climate change is a defining issue of our time and there is no time to lose. There is no Plan B because we do not have Planet B," said the United Nations Secretary-General Ban Ki-moon while participating in New York City's People's Climate March on September 21. The Secretary-General was one of nearly 400,000 marchers intent on sounding the alarm in advance of the UN's own Climate Change Summit. Several Latino and Latino serving organizations collaborated with march organizers, among them Construyendo Puentes (Building Bridges).

I borrowed the phrase, "A New Shade of Green," from the recently concludedAmericas Latino Eco Festival, a six-day event in Boulder, Colorado. The festival offered a wide range of workshops with climatologists and other experts, paid homage to environmentalists Chico Mendes and César Chávez and scheduled diverse cultural presentations, including a performance by Grammy awardee La Santa Cecilia, whose remake of John Lennon's 1967 classic, "Strawberry Fields Forever," shedding light on the lives of migrant harvesters of the fruit, demonstrated the active role musicians and artists can play in this cause. The festival was organized by Americas for Conservation and the Arts, organized to majoritize the arts and peoples of the Americas, and to enhance understanding and respect across cultures and ecosystems.

As the Smithsonian unveils its new programming around theme of Anthropocene; Earth in the Age of Humans program, it is important to not only underscore that Latinos are actively involved in this issue, but to also understand why too many in our community are negatively impacted by the effects of climate change, and to think more deeply about the role of cultural workers and organizations, large and small, in responsibly and creatively addressing this concern.

It is known that while poor and minority communities are more likely to be impacted by the consequences of climate change, they are also less likely to contribute to its underlying causes. Their carbon footprint is smaller--they purchase fewer goods, drive and fly less and reside in smaller housing units, among other considerations. Not long after Hurricane Sandy (2012), I visited cousins in Red Hook, a Brooklyn neighborhood devastated by the storm, one exacerbated by accelerated sea-level rise. Red Hook has one of the largest low-income housing projects in New York, containing a goodly number of Latino households. What I saw was emergency fencing, temporary portable facilities and other signs of displacement. I can only imagine the resulting social, economic and health challenges. Poor people have limited access to health care, making them more susceptible to infectious diseases, malnutrition, psychological disorders and other public health challenges caused by disasters. Over the years we have witnessed numerous climate change-induced heat waves. Due to rising energy costs some working class Latinos have limited access to air conditioning and because many live in urban areas, their residences are impacted by the "heat island" effect. They have less mobility, limited access to warning systems and, because many have limited English language skills, may be slow to take appropriate action in the face of looming danger. Because many do not have homeowners insurance or depend on inefficient public housing authorities, their period of recovery is typically longer. Experts are noticing increasing numbers of Latinos among the class of "environmental migrants," sure signs of displacement and attendant economic decline and social stress.

In his article, "Community-Driven Research in the Anthropocene," Rajul E. Pandya notes, "In the Anthropocene, the gulf between scientific understanding and civic decision-making simultaneously increases the likelihood of disaster, our vulnerability to natural hazards and the inequity of their impact." Pandya carefully articulates the need to "better integrate scientific knowledge into cultural, ethical and aesthetic frameworks," which is what the Americas Latino Eco Festival strived to accomplish. It is clear that environmentally challenged Latino communities must continue to inform a more collaborative, solutions-oriented science driven by community-directed research. Active community participation in scientific research and applications can produce better solutions in addressing public health challenges and managing natural resources and disasters. It can also create new employment opportunities, strengthen social networks and build lasting, functional partnerships between research institutions and impacted populations. These approaches and outcomes play a key role in creating the resilience Latino communities will need to withstand and thrive in the face of natural and human-induced disasters.

The goal of the UN's Climate Summit is to develop strategies to reduce emissions, strengthen climate resilience and mobilize political support for a global agreement, in 2015, that reduces global temperature by 2-degrees Celsius. I do not think I am alone in imploring the convened leaders to listen to the organized, informed voices of the most affected by anthropogenic climate change in developing solutions and implementing actionable agendas.