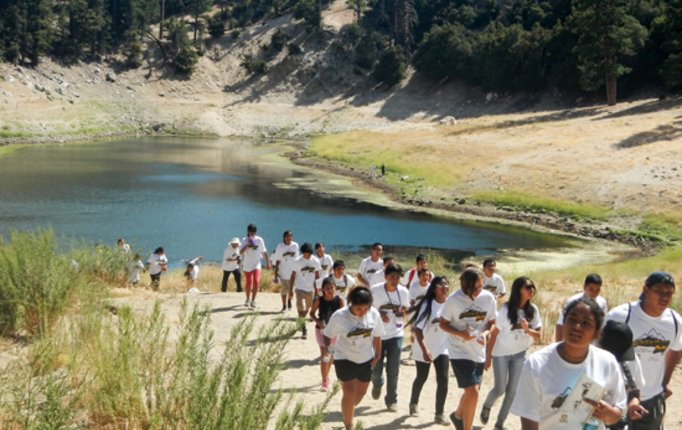 Los Angeles Latinos applauded news that President Barack Obama will protect the San Gabriel Mountains as the nation's newest national monument on Friday, proving once again that our community concerns extend beyond the issue of immigration.

The designation will help preserve an area of Los Angeles County that provides 70 percent of its green space and a third of its drinking water. It helps permanently protect watersheds and water quality, conserve fish and wildlife, enhance air quality and provide opportunities for healthy outdoor recreation. It could also lead to more facilities, restrooms, visitor services and staffing, including multilingual rangers.

Latinos were actively engaged in the local effort to bring attention to the San Gabriel Mountains and to advocate for its protection.

In early August, 130 Latino youth through the Youth Awakening Association spent the day in the San Gabriel Mountains. The youth hiked in the mountains and along the San Gabriel River and learned more how about the role they can play in its protection. From the basics like picking up trash, which they have done since the visit, to more civic-minded endeavors like contacting their elected officials, these Latino youth want to make sure that the San Gabriel Mountains are available to their children and grandchildren.

"Our Latino youth are excited that the President has taken action to protect this natural treasure, which is only a stone's throw from where they live," said Pastor Ricky Lopez, the youth sectional leader for the San Gabriel Valley, Assembly of God Churches in Los Angeles and a member of Por la Creación Faith-based Alliance. "During their hike, these youth noted the abuse and neglect prevalent in the Mountains -- it was important to them that we do something to protect it."

Several of the youth joined Pastor Lopez at the U.S. Forest Service and the U.S. Department of Agriculture's public meeting on August 26 in Baldwin Park, Calif. Carrying banners with the words "We Love San Gabriel Mountains," the youth expressed their desire for President Obama to protect the public lands in the mountains as a national monument. For the Latino youth, the national monument designation demonstrated how they can play a role in positively affecting their community and society.

The Latino community's involvement adds to the growing evidence that suggests this engagement from the Latino community on an environmental issue is not just an anomaly, but is something to be expected, especially as the political power of the nation's largest and fastest growing minority group continues to strengthen.

In August, HAF and Latino Decisions released a new report -- analyzing nine major public opinion polls from the last three years -- that finds Latinos overwhelming support greater environmental protections, such as preserving national public lands, so much so that conservation issues could influence voting decisions in the mid-term elections. As the report says, "When it comes to policies and candidates, Hispanics consistently articulate their preference for an agenda that actively promotes a cleaner environment and preserving public lands."

There is a misperception that Latinos are solely focused on the issue of immigration -- don't get me wrong; it's still a major concern -- but the work of this community in Los Angeles, coupled with the mounting polling evidence and increased activities in the West, proves yet again that conservation issues, like protecting our national public lands, are a significant concern for our nation's Latinos.