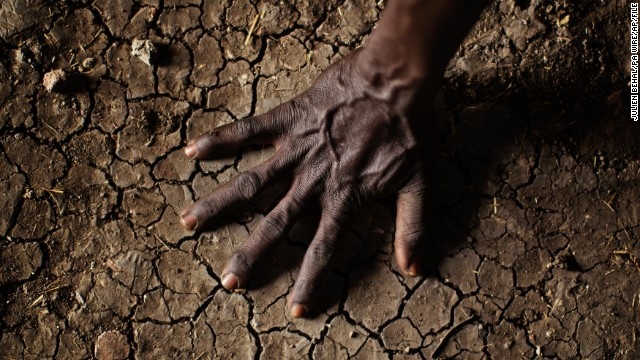 The Earth is locked on an “irreversible” course of climatic disruption from the buildup of greenhouse gases in the atmosphere, and the impacts will only worsen unless nations agree to dramatic cuts in pollution, an international panel of climate scientists warned Sunday.

The planet faces a future of extreme weather, rising sea levels and melting polar ice from soaring levels of carbon dioxide and other gases, the U.N. panel said. Only an unprecedented global effort to slash emissions within a relatively short time period will prevent temperatures from crossing a threshold that scientists say could trigger far more dangerous disruptions, the panel warned.

“Continued emission of greenhouse gases will cause further warming and long-lasting changes in all components of the climate system, increasing the likelihood of severe, pervasive and irreversible impacts,” concluded the report by the United Nations’ Intergovernmental Panel on Climate Change (IPCC), which draws on contributions from thousands of scientists from around the world.

The report said some impacts of climate change will “continue for centuries,” even if all emissions from fossil-fuel burning were to stop. The question facing governments is whether they can act to slow warming to a pace at which humans and natural ecosystems can adapt, or risk “abrupt and irreversible changes” as the atmosphere and oceans absorb ever-greater amounts of thermal energy within a blanket of heat-trapping gases, according to scientists who contributed to the report.

“The window of opportunity for acting in a cost-effective way — or in an effective way — is closing fast,” said Michael Oppenheimer, a Princeton University geosciences professor and contributing author to the report.

The report is the distillation of a five-year effort to assess the latest evidence on climate change and its consequences, from direct atmospheric measurements of carbon dioxide to thousands of peer-reviewed scientific studies. The final document to emerge from the latest of five assessments since 1990, it is intended to provide a scientific grounding for world leaders who will attempt to negotiate an international climate treaty in Paris late next year.

While the IPCC is barred from endorsing policy, the report lays out possible scenarios and warns that the choices will grow increasingly dire if carbon emissions continue on their current record-breaking trajectory.

“It’s not too late, but the longer you wait, the more expensive it gets,” Gary Yohe, a Wesleyan University professor who also participated in the drafting of the report, said in an interview. Damage to the Earth’s ecosystems is “irreversible to the extent to which we have committed ourselves, but we will commit ourselves to higher and higher and higher damages and impacts” if the world’s leaders fail to act, Yohe said.

A succession of IPCC reports since the 1990s have drawn an ever-clearer connection between human activity and climate change. But Sunday’s “synthesis report” makes the case more emphatically than before, asserting that the warming trend seen on land and in the oceans since the 1950s is “unequivocal” and that it is “extremely likely” — a term that the IPCC uses to denote a 95 percent or greater probability — that humans are the main cause.

“Human influence on the climate system is clear,” the panel states in a 40-page summary intended for policymakers.

In late 2013, when the first report of this round of the IPCC’s work came out, skeptics trained their attention on the contention that in recent years the rate of global warming has seemingly “paused” or slowed down. But the latest document is fairly dismissive of that idea, acknowledging that, while the rate of warming in the past 15 years has indeed been somewhat smaller than the rate since 1951, “trends based on short records are very sensitive to the beginning and end dates and do not in general reflect long-term climate trends.”

Although it is too early to say, claims about a possible slowing of global warming may be swept aside by new data: According to the National Oceanic and Atmospheric Administration, all-time monthly temperature records were broken four times in 2014 — in May, June, August and September — raising the possibility that 2014 may set a record as the hottest year ever.

In cautious and often technically complex language, the new report cites soaring emissions of carbon dioxide, methane and other greenhouse gases in the past 60 years as the cause of nearly all the warming seen so far. While carbon dioxide is a naturally abundant gas essential for plant photosynthesis, it has been accumulating in the atmosphere at an unprecedented rate as a byproduct of the burning of fossil fuels by automobiles, power plants and factories. Concentrations of the heat-trapping gas is 40 percent higher than in pre-industrial times, a level “unprecedented in at least the last 800,000 years,” the report states.

Most of the excess heat is absorbed by the ocean, muting the effects. Yet, climate change is having profound impacts on “natural and human systems on all continents and across the oceans,” the panel concluded. It cited rising sea levels, more extreme weather events, warmer air and ocean temperatures, melting glaciers and vanishing sea ice.

And because of the long amount of time that carbon dioxide remains in the atmosphere, some impacts are locked in, perhaps for centuries to come, the report warned.

“A large fraction of anthropogenic climate change . . . is irreversible on a multi-century to millennial time scale,” the report said. Sea level rise, for example, “will continue for many centuries beyond 2100” because of ice-sheet melting that is underway and other causes.

Scientists and policymakers have set a goal of restraining the average global temperature increase to no more than 2 degrees Celsius, or 3.6 degrees Fahrenheit, on grounds that a higher increase would change the climate so dramatically that neither humans nor natural ecosystems could easily adapt. That would probably require keeping concentrations of key greenhouse gases in the atmosphere to under 450 parts per million by 2100, the panel said. Concentrations passed 400 parts per million for the first time in 2013.

Even with a rapid shift to renewable energy, the task of achieving such drastic reductions is daunting, IPCC Chairman Rajendra Pachauri said in a speech last week as panel members began final revisions to the report.

“May I humbly suggest that policymakers avoid being overcome by the seeming hopelessness of addressing climate change,” Pachauri said. “It is not hopeless. This is not to say it will be easy.”

The report will likely add fuel to the debate over environmental policies in key congressional races. Candidates in several Senate and House races have clashed over how to respond to climate change and whether it indeed exists.

Secretary of State John F. Kerry, reacting to the report, said it was time to move beyond the politicization of climate science.

“We can’t prevent a large scale disaster if we don’t heed this kind of hard science,” Kerry said in a statement. “The longer we are stuck in a debate over ideology and politics, the more the costs of inaction grow and grow. Those who choose to ignore or dispute the science so clearly laid out in this report do so at great risk for all of us and for our kids and grandkids.”