Voces in Action
Why do black and Latino Americans support climate action so much more than whites?
View News Categories
+ 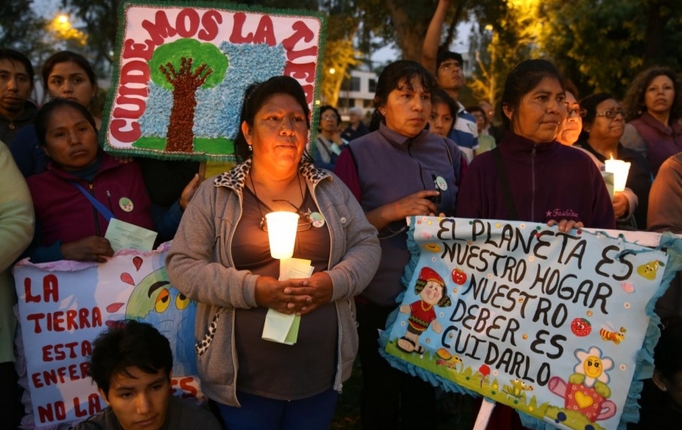 Why do black and Latino Americans support climate action so much more than whites?
December 2, 2014
Climate Change

This Monday in Lima, Peru, the next stage of international climate negotiations opens, buoyed by recent pledges by the U.S. and China to cap their emissions. The setting certainly doesn't hurt matters -- unlike English speaking countries such as the U.S., Canada, and Australia, the countries of South and Central America have not traditionally nourished much homegrown global warming skepticism.

"I think there’s a good case to be made that what’s happening in Latin America is out in front of any other region of the world," says Lou Leonard, vice president for climate change at the World Wildlife Fund. As examples, Leonard cites Chile's recent passage of a carbon tax, Costa Rica's plans to become carbon neutral, and Mexico's ambitious climate law.

But it's not just Latin America -- Hispanics and Latinos in the U.S. also stand out as among the more green of demographic groups on questions of climate change. Such is the upshot of data from a June Washington Post-ABC News poll, which we re-examined on the eve of the Lima meeting.

In the poll, both Hispanics/Latino Americans and Africans Americans were more likely than U.S. whites to say climate change is a very serious problem confronting the country:

Furthermore, Hispanics/Latino Americans were slightly more willing than whites and African Americans to say that the federal government should limit the release of greenhouse gases in an effort to reduce global warming:

(Note that results for the chart above combine two similar questions asked of half samples of poll respondents. One half was asked about regulating “existing power plants.” The other half was asked about states limiting gases within their borders. Each question produced nearly identical results.)

Finally, Hispanics/Latino Americans are far more willing than African Americans -- and a little more so than whites -- to allow the government to regulate greenhouse gases, even if that meant an increase in utility bills of $20 per month.

Two other polls conducted at nearly the same time, from NBC/Wall Street Journal and Quinnipiac University, asked similar questions about regulating greenhouse gases. These polls showed no differences between Hispanic/Latino Americans and African Americans, each of which were more willing to regulate than whites. A recent survey by the Public Religion Research Institute also found greater climate concern among Latino Americans.

So overall, what can we make of these data?

First, they are very consistent with a much discussed topic in the social science literature called the "white male" effect, in which white males have been found to be generally less concerned about a number of environmental and other types of risks. In particular, in the U.S., conservative white males have been shown to be more dismissive of climate change risks, which one group of researchers suggested might be due to the fact that they have "disproportionately occupied positions of power within our economic system."

Second, when it comes to Hispanic/Latino Americans in particular, there has been interesting research on their reasons for climate concern. One common theme is that greater awareness of "transnational ties" may be an important factor -- in other words, awareness of how people think and how they grapple with environmental issues in other parts of the world. And indeed, in major South American countries like Brazil and Argentina, there is strong acceptance of the idea that global warming is caused by humans.

So as the Lima meeting commences, it's significant to find that the largest U.S. ethnic group -- Hispanic/Latino Americans, who comprise 15 percent of the population -- are so strongly in favor of climate change action. This is, clearly, a constituency that U.S. climate campaigners very much need to mobilize, and the Lima talks will surely be a key moment to do so.