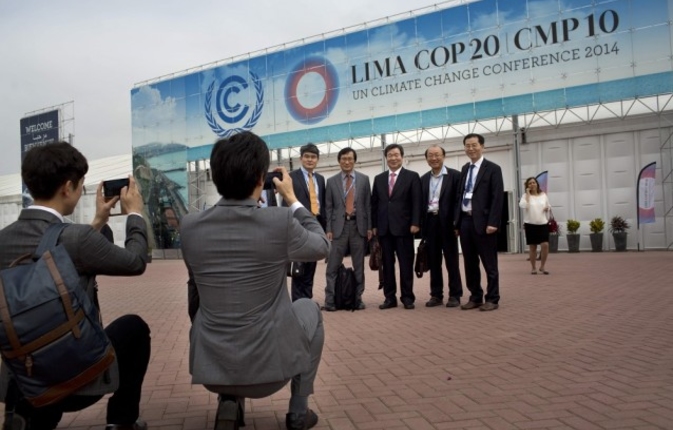 LIMA, Peru (AP) — With 2014 on track to become the warmest year on record and time running short, more than 190 nations began talks on a new worldwide deal to limit greenhouse gas emissions and keep global warming from causing irreversible damage.

New targets for fossil fuel use were announced ahead of the climate conference by the U.S., the European Union and China, the first Asian nation to make such a pledge. This has injected optimism into negotiations that are supposed to climax in Paris next year with the adoption of a long-awaited climate pact.

But India, Russia, Japan and Australia have yet to commit to new limits; and scientists say much sharper emissions cuts are needed in coming decades to keep global warming within 2 degrees C (3.6 F) of pre-industrial times, the overall goal of the U.N. talks. Global temperatures have already risen about 0.8 degrees C (1.3 F), and more heat-trapping gases are emitted every year.

Every degree of warming can cause long-lasting impacts, from melting ice caps and rising sea levels to the loss of species.

"Human influence on the climate system is clear," Rajendra Pachauri, who leads the U.N.'s panel of climate-change experts, told delegates at the opening session in Lima on Monday.

To have a decent chance of reversing the warming trend before the planet hits the 2-degree mark, the world needs to slash emissions by 40 percent to 70 percent by 2050 and to near-zero by the end of the century, according to the panel's assessments.

Scientists are practically united in warning that there's no way to meet this goal by continuing business as usual.

It would require a sustained, permanent, worldwide shift from fossil fuels to renewable energy sources to power homes, cars and industries. And even then, the transition might not happen fast enough without a large-scale deployment of new technologies to remove greenhouse gases from the atmosphere.

"We call on the world to ensure the opportunity does not slip away," said Nauru's Marlene Moses, representing a group of Pacific island nations threatened by rising seas.

The biggest challenge for the U.N.-sponsored talks is dividing responsibilities between rich Western countries and emerging economies such as China and India. The poorest and most vulnerable nations also need help to develop their economies without aggravating global warming, and to adapt to climate changes that are already causing more violent weather, prolonged droughts and intense flooding.

Among them is host country Peru, whose glaciers are melting ever-faster, threatening water supplies on the coastal desert where 70 percent of its citizens live and threatening the nation's hydropower and food security.

The negotiators in Lima are focusing on a draft agreement that can be refined before the Paris meeting a year from now.

A key issue is what data each government should provide so that formal emissions targets can be compared.

Developing countries also want rich nations to make good on promises of financing to reduce emissions and mitigate climate change impacts, which range from the spread of diseases to coastal flooding to major disruptions to agriculture.

There's no common agreement on how that money should be used; for example, The Associated Press found that Japan has spent $1 billion of its climate financing on new power plants in Indonesia that burn coal — the top source of man-made emissions. Japan says it improves the environment because the new plans burn cleaner, but critics said coal has no place in climate financing.

The U.N.'s weather agency is expected to present temperature data showing 2014 could be the hottest year on record.

Peru is among the countries most affected. The Andean nation has 70 percent of the world's tropical glaciers, which have lost more than a fifth of their mass in just three decades, putting 300,000 highlanders under severe stress as pastures and croplands dry up, the planting cycle becomes more erratic and cold snaps more severe. Lima is the world's second-largest desert capital after Cairo, Egypt, and its 10 million inhabitants depend on glacial runoff for hydropower and to irrigate crops.

Latin America and the Caribbean cause less than 10 percent of global emissions, and yet its people are already shouldering and oversized burden. Climate change is blamed for the extinction of plants and animals in Andean cloud forests and for damaging offshore fisheries. Even if warmer weather benefits industrial agriculture in some places, more people are expected to go hungry as subsistence farming suffers.

The regional economic damage from all this will reach $100 billion a year by mid-century, according to research done for the Inter-American Development bank.

"The people with the least intensive climate lifestyles are suffering the most," said geographer Jeffrey Bury of The University of California at Santa Cruz, who studies the social and economic impacts of glacier loss.

"I think we can use the Andes high mountain environment," he said, "to understand what the future holds for the rest of us."