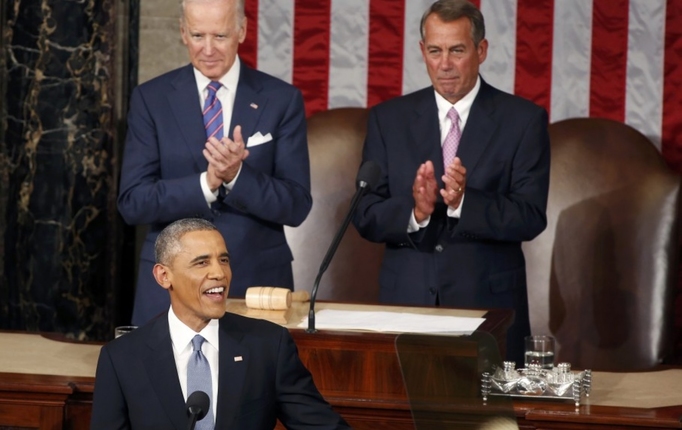 Adrianna Quintero: Rising Above the Noise on Climate
January 20, 2015
State of the Union

Today, President Obama will deliver his 6th State of the Union Address. Anyone who follows politics knows that the SOTU often shows the best and the worst of our two-party system as our representatives in congress pull no punches showing where their allegiances lie. While there is something funny about watching adults, some old enough to be our grandparents, act like the children taking sides in a playground fight, the truth is not so funny.

There is little doubt that our government is in a state of complete gridlock. Dogmatic politicians have done their best to try and paralyze any progress President Obama has tried to make leaving us -- the American voter and taxpayer -- stuck in the middle. Despite their best attempts, U.S. economic growth has been brisk and the unemployment rate has fallen to 5.8 percent and the administration has managed to forge ahead taking progress into its own hands and putting our country in great shape despite the best efforts of the "haters" on either side of the aisle.

This progress by the administration is impressive and shows that progress can be achieved if we the people make ourselves heard. If our leaders know we care it's tough for them to ignore us.

This has been evident in the fight on climate change. Just this past week, NOAA announced that this year was the hottest on record. Climate change is here: droughts, extreme weather events, sea-level rise and the costs associated with these are no longer in question. And while a small percentage of doubters still try to challenge the established science, most Americans are calling for action. A new poll from the University of Michigan and Muhlenberg College shows that nearly 70 percent of American support limits on carbon pollution.

Millions and millions of Americans have called for this and this year, the Environmental Protection Agency is working to put limits on the pollution that causes climate change. We want clean air, we want a healthy future for our kids, we want solutions, not bickering that ultimately only benefits the financial interests of big polluters and leaves us holding the bill.

Limiting the pollution that causes climate change by getting us away from coal burning power plants and moving us towards a clean energy future is a critical step in tackling this crisis and the problems that come with it.

Business leaders, parents and young people of all backgrounds are weighing in and calling for action. One group that has been especially concerned also happens to be one of the most important voting blocs: Hispanics.

For years now, NRDC has talked about the importance of mobilizing Latinos on environment. Not only are many Latino communities impacted, all -- including those not in the eye of the climate change storm -- understand that taking action now not only protects our health, it protects everything we've all worked for: our homes, our communities, our children's future.

In 2014, along with Voces Verdes, NRDC released polling that again made it clear that overwhelming support exists among Latinos in the United States for the EPA taking action against climate change.

Voces members and allies mobilized to submit comments and testify at the various EPA hearings on the proposed standard to limit carbon pollution from new power plants. For several years now, numerous Latino organizations have voiced their support for limits on industrial carbon pollution.

This support has been growing for decades and is finally being recognized as an important force; so much that First Lady Michelle Obama has invited Nicole Hernandez Hammer, a friend and longtime partner of Voces Verdes and NRDC to join her for the State of the Union Address. This recognition of Nicole, who is not only a Latina leader but also a mother and scientist, shows just how the face of the climate champion has changed over the years.

No longer are climate champions only hippies looking to live off the grid. Today's climate champions are you and me. Black, white, Latino and Asian, women and men of all socioeconomic backgrounds, hikers, hunters, and housewives, and that's exactly how it needs to be. We all depend on a healthy planet to survive and thrive and protecting biodiversity requires diversity in our approach.

Until we all add our voices, the petty partisan banter will dominate the discussion. We need to rise above the noise and make sure our political leaders are listening to the people.