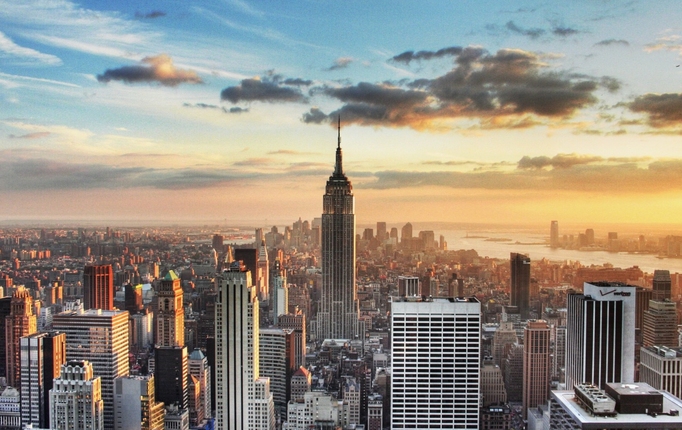 Climate change is already impacting New York City with rising temperatures and sea levels, which will only worsen as the century continues, according to a report released Tuesday from a panel of scientific experts.

In its 2015 report, the New York City Panel on Climate Change found that the most populous city in the United States is expected to see more frequent heat waves and extreme precipitation events. This is in line with the national and international trends other leading scientific bodies have observed.

Sea level rise, however, may pose an even greater challenge for coastal New York. Average sea levels have risen about 1.2 inches per decade in the city since 1900, or about 1.1 feet overall, according to the new report. This is almost twice the average global rate of 0.5 to 0.7 inches per decade.

This trend is expected to accelerate in the coming decades as greenhouse gas emissions generated by human activity continue to trap more of the sun's heat, warming and expanding the oceans and melting land-based glaciers and ice caps, among other contributions.

“The task at hand is daunting -- and that is why we’re making an unprecedented commitment, with a sweeping plan to reduce emissions 80 percent by 2050, and a comprehensive, multi-layered resiliency plan that is already making neighborhoods safer," New York City Mayor Bill de Blasio said in a press statement.

The report's authors project sea levels around New York City will rise 11 to 21 inches by the middle of the century, 18 to 39 inches by the 2080s, and up to 6 feet by 2100. The researchers noted that their projections are specific to New York City, but "projections based on similar methods would not differ greatly throughout the coastal corridor from Boston to Washington, D.C."

"It is virtually certain that sea level rise alone will lead to an increased frequency and intensity of coastal flooding as the century progresses," they wrote. If sea levels rise to the higher end of current projections, twice as much of New York City will lie within the 100-year flood plain in 2100, as compared to 2013.

At 6 feet of sea level rise in 2100, nearly 20 percent of New York City's 469-square-mile land area would have a 1 percent chance of flooding in any given year. A little under 11 percent of the city's area is currently included in the 100-year flood plain, according to a preliminary FEMA assessment released in December 2013.

About 400,000 New Yorkers live within the current 100-year flood plain, which is more than any other U.S. city, including New Orleans.

"Sea level rise is an extremely challenging problem that requires both greenhouse gas emissions reduction and adaptation measures to successfully protect vulnerable coastal areas," Princeton University professor Michael Oppenheimer, who contributed to the report, told The Huffington Post. "This report is a model of how technical information can support decision-making."

"The report blends cutting-edge science with presentation of the information to policy makers in a risk-based framework so they are in a position to use it to make key judgments about how to protect a city from climate change," Oppenheimer said.

Hurricane Sandy in 2012 demonstrated some of the challenges New York will face this century, particularly when it comes to adapting the city's aging infrastructure and transportation network. Flooding from Sandy knocked out power for part of Manhattan and the storm caused unprecedented flooding in the city's train and vehicular tunnels under the Hudson and East rivers.

“Adapting the city for the risks of climate change is one of the great challenges of our time,” Daniel Zarrilli, director of the mayor’s Office of Recovery and Resiliency, said in a press release.

Along with Tuesday’s report, city leaders also announced progress on efforts to make New York more sustainable and improve resiliency. Measures include design work on a flood protection system for Manhattan’s Lower East Side and investments to protect vulnerable waterfront communities, among other programs. The city has also coated over 6 million square feet of roofs with reflective paint to cool buildings and combat urban heat island effect.

“This report from the New York City Panel on Climate Change advances the science of climate resiliency and highlights the risks the City faces from multiple climate impacts, making it clear that we must continue to build a stronger, more resilient New York,” Zarrilli said. “That’s why we are moving forward on projects across the city in partnership with a wide array of community partners and other stakeholders.”

Former New York City Mayor Michael Bloomberg introduced this panel on climate change in 2008 as part of the city's long-term sustainability plan. In 2012 the New York City Council made the panel a fixture of the city, tasked with meeting at least twice a year and producing a report on climate impacts at least every three years. The new report is the culmination of the panel's work from January 2013 to January 2015.